A look inside the NHL's Assists leaders

Share All sharing options for: A look inside the NHL's Assists leaders

A post on Kukla's Korner pointed me towards this article at the Denver Post, which discusses how Minnesota Wild Director of Hockey Operations Chris Snow is forging ahead in the quest to take the use of NHL statistical analysis to another level. In particular, he notes wanting to track assists, monitoring how many of a players assists are "first assists" vs. "second assists", the presumption (which I find quite reasonable) being that first assists are a better measure of offensive contribution.

Well Chris, if that's what you need, drop me a line (or, for that matter, any other NHL front-office execs who might be interested). In the meantime, I'll provide a Top 10 listing that might help sort this question out. 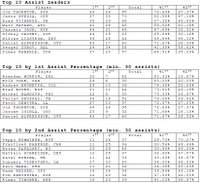 So what does this tell us? Well, one obvious point is the prevalence of defensemen getting a large share of 2nd assists, which isn't surprising, and is most likely the result of good breakout passes. I know when I'm playing D in the beer league, that's how I get most of my assists - find the one zoomer on our team, and get him the puck with speed out of our own end. Exceptions to that trend include Niklas Lidstrom, Sergei Zubov, and Tomas Kaberle, all defensemen ranking high in the prevalence of 1st Assists. Edit: Pardon the brain fart there, only Kaberle amongst those 3 shows a relatively high 1st Assist percentage, and he's not among the top 10 in that ranking.

One interesting contrast is between Jason Spezza and Daniel Alfredsson in Ottawa; both are forwards in a highly productive offense, but Spezza benefitted from 2nd assists to a much greater extent than Alfredsson. As always, dig in and let me know what other slices and dices might be worth pursuing here...