Share All sharing options for: What Makes NHL Teams Win?

As promised, here's a look at a few more extended statistics, and their relationship to the ultimate result - points in the standings for NHL teams*. Today's sheet combines the Hits information discussed yesterday with Giveaway and Takeaway data, along with a combination of the two that I am hereforth proclaiming to be Puck Possession Plus/Minus (don't worry, I don't think the term, or the stat, will last). I thought it might be interesting to subtract the number of Giveaways from a team's Takeaways total, to come up with a rough guide to their ability to seize control of the game. It turns out I was wrong, but I'll include it this one time, anyway.

So what do these numbers (again from the 2005-2006 Regular Season) tell us? Well, the most interesting result is that Giveaways seem to be positively (albeit very weakly) correlated to regular season points. That is, the more Giveaways a team had, the likelier they were to be high in the standings. Typically one would think of Giveaways as "bad" events, likely to cause a team to lose, and while that is certainly true, it is just as likely that a team that has possession of the puck more than the other team, will, over the course of time, also give it up more. After all, look at the Chicago Blackhawks - they had the least number of Giveaways in the NHL last year, but that's more likely a result of not having the puck in the first place very often. Unfortunately we don't have time-of-possession data to index this by, so we don't know the extent to which that argument holds.

Also of interest is the positive correlation between Takeaways and Regular Season Points, which is also positive and slightly stronger than the Giveaways relationship. This makes solid sense; taking the puck away from the other team should momentarily give that team an advantage, and in fact the three worst teams in the league last year (Chicago, Pittsburgh, and St. Louis) were all near the bottom of the Takeaway totals. By comparison, the top three Takeaway teams were Montreal, Colorado, and Atlanta, and all fought down to the wire to make the playoffs (Atlanta unsuccessfully), which perhaps is what fed their zeal to hound the puck.
And before you ask, no, there wasn't a significant correlation between Hits and Takeaways. There were plenty of teams that hit a lot but didn't take the puck (Toronto & Boston), some who took the puck without hitting (Colorado & Detroit), some who did both (Montreal & Dallas), and those who apparently just didn't go after their opponents' puck carriers (Buffalo and Florida).

*I realize it would be best to remove the effect of overtime losses and shootouts from this, and intend to do so in the near future. This is good enough for a start. 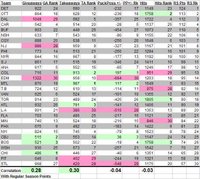