Break Up The Bruins, and Lay Off The Sens...

Share All sharing options for: Break Up The Bruins, and Lay Off The Sens...

As we close the first quarter of the 2006-7 NHL Regular Season, there are some teams out there feeling great about their starts (Buffalo, Anaheim) and others that are feeling the heat over disappointing results (Philadelphia, Columbus, Ottawa). But today's question is, how much of this reaction is overdone? Which teams are likely to come back towards the middle, as the ups and downs of the long NHL winter take their toll?

The tool I'm using here is "PythagenPuck", as outlined by Alan Ryder of Hockey Analytics. The basic idea is that a team's winning percentage bears a close relationship to their Goals For and Goals Against (shocking, ain't it?). The formula is pretty strong, in that if I take the Goals For and Against for each team in the league over the last three years, it kicks out an expected winning percentage that is usually within 2 or 3%, excluding the points from Shootout Wins (i.e., it would predict a .568 win percentage for San Jose last year, against an actual result of .604, or .598 if you back out extra points earned from shootout wins). I've backed out points from Shootout Wins because, being separated from the regular game action, that's probably worthy of it's own analysis, which I won't get into here.

Where I'm headed with this is that there are some teams out there right now whose winning percentage is remarkably higher or lower than PythagenPuck would predict based on Goals For and Against, meaning that it is likely that they'll see some correction over the course of the next few months and come back towards the norm. They've benefitted from (or been victimized by) some lucky bounces so far, and perhaps things aren't as rosy (or as bad) as they appear.

The table below shows the gap between actual winning percentage and the PythagenPuck prediction for each of the last three full seasons, along with this season so far. The top "overperforming" teams have been highlighted in green, while the underperformers are shaded pink. For example, in 2002-03, Calgary outperformed the prediction by 0.064 (a win percentage of .457 against a predicted .393). Average gaps for each season are listed below, and the sort is by this year's gap, starting with the biggest underperformer (Ottawa) and ending with the biggest overachiever (Boston).

Next we have the current (as of Friday, November 17) winning percentage and points pace for the 2006-07 Regular Season, excluding points from Shootout Wins. Last year, teams earned anywhere from 1 to 12 extra points in the standings from shootout victories, but your guess is as good as mine as to how that will shake out this year. And if I was a GM, player, or fan, I wouldn't be counting on shootout victories to get my team into the playoffs.

The "Return To Normal" column reflects what PythagenPuck would predict for each team for the whole season, bumped up by the average gap as shown at the bottom for 2006-07 so far (0.019). I'm putting this in there because over the last few years the league-wide average gap has been slightly above zero, and I wanted to reflect that in this season's projections. What would make the most sense here would be to revise the P value in PythagenPuck (see page 11 of Ryder's paper Win Probabilities) for the "new NHL", but this is close enough for blogwork.

"Implied Points Result" shows the points in the standings each team would gain if they finish the season at the "Return To Normal" win percentage. The big assumption here is that current Goals For and Goals Against trends continue for each of these teams. If Brian Leetch and Jason Allison sign with a team and start pounding out goals, then that team's PythagenPuck prediction would change correspondingly.

So in the end, what do the numbers here tell us? Well, at first glance, it looks like the pressure in Ottawa is a bit overdone. Their gap so far this year is staggeringly negative. In fact, they've actually scored more goals than they've given up, so over the long haul they should pop back up over .500. And if they can improve their GF/GA, the jump should be even more dramatic. They're really the only team that is significantly underperforming in the W/L column.

As for overachievers, we have three leading contestants. New Jersey, Nashville, and Boston are all racking up more points than would normally be expected. For the Devils, that means they may end up fighting just to make the playoffs unless things turn around. They're fortunate to have a winning record while having given up more goals than they've scored. Nashville still looks like a strong playoff team (but not necessarily a 100-point squad), and Boston looks like even a bigger mess than we thought. Yes, Bruins fans, you do have something to be thankful for next Thursday as you carve up that turkey - a .500 record for a team that gives up 4 goals for every 3 it scores. 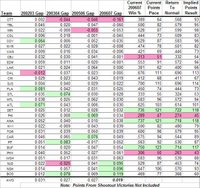