Fighting the Good Fight In Front of the Net

Share All sharing options for: Fighting the Good Fight In Front of the Net

Before heading out for the Thanksgiving weekend, I wanted to leave a tasty treat for all of you to snack on - a look at rebound opportunities. Especially in a close game, working hard for those extra shots can make the difference between winning and losing, and the battle around the crease can be one of the most exciting aspects of the game.

My criteria here involves looking at shots that occur within 5 seconds of another shot, and are taken from 60 feet or less, without an intervening faceoff or other event. In his seminal Shot Quality paper, Alan Ryder uses the filter of 2 seconds, and a max shot distance of 25 feet. The difference here is that I'm not concerned with the goalie's ability to stop this rebound shot, I'm interested more in how often these events are occuring. For the purposes of Shot Quality (and a goalie's ability to make a save), a slapper from 50 feet should be the same whether it came off a faceoff win or whether an initial shot came in, and the rebound was picked up and fed back to the point. For this analysis here, however, I'm trying to figure out which teams are getting those "second shot" chances.

For the 2005-6 NHL Regular Season, I tallied 4,420 rebound shots, making for roughly 1.8 per team, per game. For 2006-7 (through last Sunday's games), I've got 753, which across the first 296 games yields only 1.3 per team, per game. Today, I'll post the Rebounds For numbers for this year and last, hopefully over the weekend I'll put up similar numbers for Rebounds Against.

The table below shows Rebounds For per game, for 2005-6 as well as the present season, and the difference between the two. Top performers in each category are shaded green, bottom-feeders are shaded pink. What we see here is that Colorado and Vancouver have markedly increased their rebound opportunities, while the San Jose Sharks, Ottawa Senators, and Florida Panthers have created much fewer than last season. At the bottom of the list, you have an indicator of how bad the Central Division is outside of Detroit and Nashville. St. Louis, Chicago, and Columbus garner the least rebound opportunities in the league, and for the Blue Jackets, the margin is pretty large. Perhaps a factor in Gerard Gallant's firing was that his boys just weren't winning (or fighting?) the battles in front to score those tough goals. 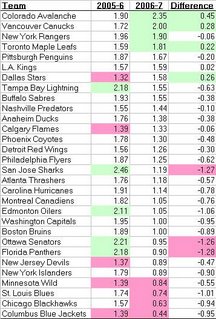