Which Teams Are Giving Up Those Juicy Rebounds?

Share All sharing options for: Which Teams Are Giving Up Those Juicy Rebounds?

Following up on our previous look at offensive rebound opportunities, it's now time to see which teams are locking down the front of the net, and which ones are rolling out the red carpet for opposing forwards to try, try again if their first shot doesn't succeed. We're looking at team performance here, as it seems to me that preventing rebounds is a joint effort. Goaltenders try to contain or at least manage them, and defensemen need to sweep them out of harm's way as quickly as possible, while tying up their opponent so they can't get a stick on the loose puck.

The table below shows Rebounds Allowed Per Game for the 2005-6 NHL Regular Season, as well as the numbers so far this season (through the 296 games as of November 19). The league averages were 1.8 rebounds per team per game last year, and 1.3 so far this year. Again, a rebound is here defined as a shot occurring within 5 seconds of another shot by the same team, from within 60 feet, without another intervening event. Top teams in each column are shaded green, and the bottom dwellers in pink. I've also included the Shooting Percentage for these rebound shots for the two seasons, to help give a rough idea of the overall impact from these numbers. For instance, if the Devils give up 1.16 more Rebound Per Game than the Red Wings (1.74-0.58), and the Shooting Percentage is about 27% on those shots, then you can "guesstimate" that rebound handling costs the Devils about a goal every third game defensively compared to Detroit, or about 25 goals over the course of the season.

So what do these numbers tell us? Well, for starters, the defensive dominance of the Detroit Red Wings is reaffirmed. Their mark of 0.58 rebounds allowed per game is far below the rest of the league, especially comparing them to the last-place New Jersey Devils, who give up 3 times as many rebounds per game! The biggest improvement year-on-year has been made by the Tampa Bay Lightning, who went from merely average to 2nd-best in preventing rebound opportunities. The Pittsburgh Penguins have made a similar improvement, but only raising them from "truly awful" to 3rd-worst in the NHL.

So does your favorite goalie need to attach flypaper to his leg pads, or does your defense need a knuckle-dragging, low-brow banger to keep opponents clear of the crease? Take a look below and write your local GM, I'm sure he'd be glad to hear opinions on the subject... 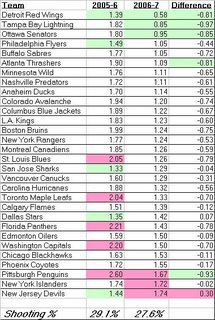