Share All sharing options for: Crease Crashing with Alan Ryder

Yesterday, Alan Ryder (of Hockey Analytics fame) posted an insightful piece over at the Globe and Mail about "Crease Crashers", those players and teams that take shots within 10 feet of the net. The basic idea is that close-in shots have a much higher likelihood of scoring, so teams able to generate those kinds of chances should score more as a result. He gathered his data from the 2005-06 play-by-play files, and presented player and team breakdowns.

I thought I'd dig a little deeper into the question, and update it with this year's numbers so far as well. First off, I was relieved to run my own analysis and find that I came up with very close to the same percentages as Alan did (I exclude Empty Net goals, of which Minnesota had one from 9 feet last year). By bringing in the additional measure of Shot Quality, we might get a further clue as to why the teams at the top of this list scored at nearly twice the rate of those at the bottom.

As a quick guide, if you take all shots from 10 feet or less and break them down by shot type (wrist, slap, etc.), we arrive at overall shooting percentage numbers across the league last season:

If some teams attempt more Wrap-Arounds, for example, it's likely that their shooting percentage will be lower as a result, since only 5.8% of those shots went in last year. The table below shows the results from last season's shots from 10 feet or less, excluding Empty Nets. I've added the Average Shot Quality, and a "Diff" column, showing how much a team's shooting percentage differs from the Shot Quality value. At the bottom, I've included Standard Deviation figures for each column. 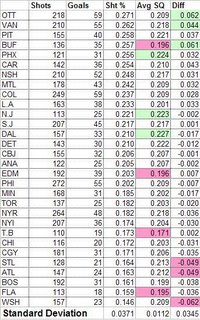 A few things jump out when I first put this together. First of all, it's surprising how closely grouped together the values in the Avg SQ column are. Outside of Tampa Bay, the low-end outlier at .171, the rest of the league runs from .195 to .227, whereas shooting percentages range from .146 to .271. It would appear that the major difference-maker when it comes to shooting percentage in this case comes down to execution, "touch", or whatever moniker you want to ascribe to teams that score in certain situations, and those that don't.

Updating these figures for the season so far gives us the following table (including a Shots/Game column, to cover Games Played disparities): 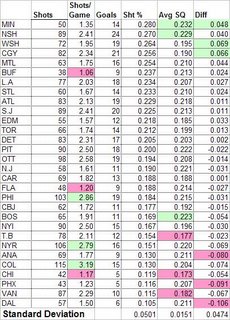 Again, note how the deviation for Average SQ is much smaller than that for Shooting Percentage, or "Diff". One interesting point in Alan's column addresses shot totals:

Teams have offensive styles, reflecting both the make-up of the team and the effects of coaching. The Flyers (272 shots) and Rangers (264), each with three players on this list, and the Avalanche (249) were the most penetrating offenses of last season. I am willing to bet that Philadelphia does not lead this list this season.

Actually, Philadelphia stands a respectable 2nd in shots within 10 feet per game, at 2.86. At least that's one part of their game that's working well...

Another angle to look at is how these numbers have changed from last season to now, on a team-by-team view. This is where we see in detail where some teams have made major changes. The Tampa Bay Lightning, for example, are getting to the net much more often than last year, but the quality of those shots is still quite low (2nd lowest in the NHL). The former effect is much more significant than the latter, so on the whole, Tampa's offense is enjoying some success in that area. 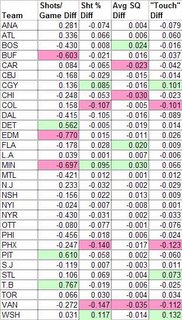 The Washington Capitals have made a huge leap in the "Touch" column, going from worst to first, largely due to the contributions of the Alexanders (Semin is 5-for-10, and Ovechkin is shooting at 35% from short range). We'll see how much these numbers come back to the mean over the rest of the season, but clearly the Caps are banging home a lot more close-in opportunities this year. As hot as Washington has been, the Phoenix Coyotes and Vancouver Canucks have gotten cold. In Vancouver's case, the quality of their shots has decreased as well, a significant contributor to their 28th-place ranking offensively.

I would think the conclusion from all this is that at least from short range, shot type doesn't make as much of a difference, and that a team's fortunes can change quickly from one year to the next. Again, we'll want to see how the rest of the year shakes out before getting too declarative about any lessons learned here, but in the meantime, it provides fodder for the "why our offense is sucking wind" conversations...