Desist with the assists...

Share All sharing options for: Desist with the assists...

Over at the Globe on Hockey blog, James Mirtle posited the natural question as to whether Sid Crosby is now the NHL's best player, given his showcase 6-point performance against Philadelphia the other night, and his ascension to the top of the NHL scoring race.

Not to poo-poo what Sid the Kid has accomplished so far this year, but I thought I'd slice up one section of the scoring race, and present the results. To what extent it helps answer Mirtle's question I leave as an exercise for the reader.

Below I've divided up the assist totals between "first" and "second" assists. The feeling among some is that 1st Assists are more directly linked to the creation of a goal, and that 2nd Assists are more often than not "cheapies" that are unrelated to the creation of an offensive chance. Actually, I recall a goal back in the 1990's where Bob Errey cut in front of the net just as Steve Yzerman let off a shot. Errey jumped in front of the goalie, and the puck caromed off his cup and into the net, so I guess even goals can be gifts as well.

Anyways, what I've presented below is a breakdown of the Top 30 Assist leaders, with breakouts of their 1st vs. 2nd, as well as the percentage that are 1st Assists. The "Mod Pts" column shows what the point standings would look like if 2nd Assists weren't counted. Anyone care to comment back with when 2nd Assists did start getting recorded?

Under this "Old Time Hockey" scoring, Teemu Selanne of the Anaheim Ducks would actually leap into the #1 spot, just ahead of Atlanta's Marian Hossa. Crosby is still within another Flyers game of catching them, only 3 points back.

As always, click to enlarge, and discuss amongst yourselves... 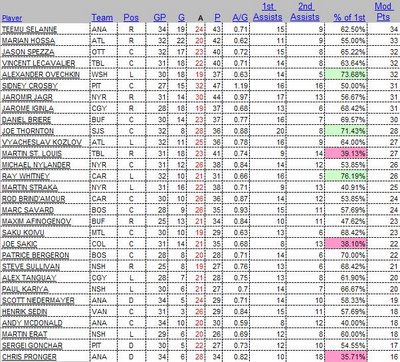