Don't miss out on Missed Shots

Share All sharing options for: Don't miss out on Missed Shots

Following up on this morning's post regarding top shooters and how often they actually put shots on net, here's a table showing this year's results so far. Again, I've taken the Top 30 players by Shooting Percentage, brought in their Missed Shot totals, and calculated a Total Shooting Percentage for each. The original ranking is in the leftmost column, the new Total rankings are towards the right, and the final column shows the portion of a player's shots that miss, and thus aren't counted in the regular stat. Players with green shading moved up through the rankings based on the new measure, and put a higher proportion of their shots on goal.

What jumps out looking at these numbers is the performance of Mike Comrie of the Phoenix Coyotes - only 4 Missed Shots in 18 games, along with a conventional shooting percentage of 18.2%! He's not getting a ton of chances, but it appears he's certainly making the most of them.

On the downside, check out Chicago's Jeffrey Hamilton, and Boston's P.J. Axelsson. Over a third of their shots are high & wide, contrary to their conventional shooting percentage which sits in the coveted 19-20% range. One difference between this year's numbers and last season's is that many of the top snipers are missing the net more than 30% of the time, including Martin Straka and Thomas Vanek. Granted, we're not quite halfway through the year, so this may change over time.

As to what causes some of these players to miss the net more than others, that would take more of a detailed, scouting-type analysis. For instance, some may be trying to pick hard-to-hit areas of the net, while others may be putting all they've got into brutal slapshots that either bore a hole through a goalie's glove or sail wide. So how's your favorite sniper faring this year? 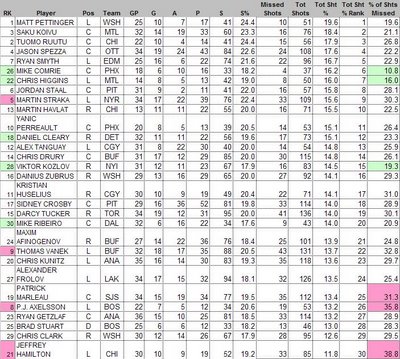