A Look at Total Shooting Percentage

Share All sharing options for: A Look at Total Shooting Percentage

It seems that any time you try and discuss the most effective shooters in the NHL, people gravitate to how "hard" or "heavy" the shot is, at the expense of other considerations, like how quickly shots are released or how accurate they are. Booming slapshots are more impressive to most than a quick wrister, so the trend is somewhat understandable.

Today's piece focuses on bringing in Missed Shots into the overall shooting percentage statistic. Normally, Shooting Percentage is defined as Goals divided by Shots on Goal. But what about shots that miss the net by three feet? Those aren't counted in the usual Shooting Percentage, so I've brought each players Missed Shots total and included that in a "Total Shots" column, which then yields "Total Shooting %" as well. Our data comes from the stats available at NHL.com - pulling together summary stats for the top 830 players ranked by shots on goal (this takes us down to guys with only 1 shot on goal all year, so I'm confident it covers over 99% of the data), linked to the RTSS stats that are also available. I do have one bone to pick with the guys at
NHL.com, as when you start pulling down page after page of stats, they switch the ordering of columns from one page to the next, apparently in an attempt to throw up an obstacle to mass access to the data. It doesn't work, as it takes about 10 minutes of work in Excel or Open Office to fix the columns. I've sent an email to their web team to see if that can be rectified, and will post whatever response I get here.

In total, besides the 73,744 "conventional" shots on goal, 7,442 Goals and an overall Shooting Percentage of 10.09%, there were an additional 29,725 Missed Shots. With our new figure of 103,469 Total Shots, that means 28.7% of those missed the net entirely, and 7.2% scored.
The table below shows the Top 30 players from last season, ranked by Total Shooting Percentage. The Rank column along the left reflects the conventional Shooting Percentage rank, and those players shaded green or pink moved significantly up or down in the standings once we bring Missed Shots into the equation. Also on the far right, we see the overall portion of shots that miss the net, with highest values in pink and lowest in green. So who are the standouts, both positive and negative?

First off, note that the Top 11 in conventional shooting percentage all fared well in the Total Shooting % stat. League leader Alex Tanguay still came out at the top of the list, since only 21.9% of his shots missed the net. In particular, Pierre Turgeon of the Colorado Avalanche missed only 16.8% of the time, well below the rest of this group. On the wild side, the "hit or miss" gang appears to be Toronto's Matt Stajan and Chad Kilger, and Detroit's Pavel Datsyuk, who shot wide or high over a third of the time.

One often-cited piece of conventional hockey wisdom is that guys with big, booming slapshots may miss the net quite a bit, but make up the difference with a shot that is more likely to score when it is on target. I didn't find anything to help support that theory (no correlation between Missed Shot levels and Shooting Percentage), and drilling down into further detail (i.e. comparing slapshots, to wristers, etc.) isn't possible because when the NHL records a Missed Shot, we don't know the shot type or distance involved.

I'll follow up later today with a similar table from this season so far... 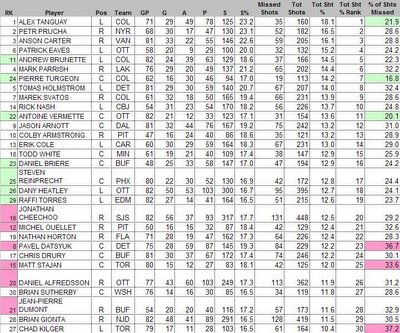