Which teams are tickling the twine?

Share All sharing options for: Which teams are tickling the twine?

Nothing's more frustrating for a hockey fan than to see their team get a great opportunity, only to see them plug the puck squarely into the opposing goalie's chest. By continuing our use of the Shot Quality concept, we can look at what kinds of chances various NHL teams are creating, and how often they are scoring on them.

Granted, the ability of a player to get a good shot off can be determined by the quality of a pass he receives, just as much as the strength and accuracy of his shot. By looking at this measure on a team-by-team basis, we put those factors into the same basket. Another issue which clouds this analysis somewhat is the unbalanced schedule. Getting to play Phoenix and Los Angeles all the time is going to work in the favor of teams like Anaheim, San Jose, and Dallas. That said, here's a slightly more detailed look at team offensive performance than you'll typically see looking only at Shots For and Goals For...

First off, the columns:

Shots For/G: Basic stat right off of NHL.com, as of last Sunday night.

Average SQ: The average percentage that those shots would have scored, based on overall percentages from last season. Again, as an example, wrist shots from 10 feet or less scored 24.79% of the time, so similar shots this season receive that value. Take all of a team's shots this season, broken down by range and shot type (wrist, slap, etc.), and this represents the average value.

Shooter Diff: The difference between actual Shoot % and Average SQ. Positive values here indicate teams that score more goals than you'd expect given the type of shots they're taking (the snipers).

Expected GF/G: This is simply Average SQ times Shots For/G. Given average shooting, this would be a team's Goals For/Game.

Shooter Diff: The difference between actual and expected GF/G, differing from the earlier Shooter Diff column due to the number of shots taken.

Following my convention, the top performers in each column are shaded green, the laggards are shaded pink.

Looking around at some of the extreme performers, the Chicago Blackhawks make for an interesting case. Near the bottom in Shots For and Shot Quality, their Expected Goals For is worst in the league, tied with Edmonton. Superior sniping, however, brings them up close to a middle-of-the-pack Actual Goals For. Adding Peter Bondra might help, but perhaps there is some talent there that new coach Denis Savard can work with, after all...

The hottest shooters in the league apparently reside in Buffalo (surprise, surprise), where actual Shooting Percentage is 3.63% above their Shot Quality, yielding them a full goal-per-game over what average shooting would provide. Whether that margin can be maintained over the course of the next several months will be key to their keeping up the torrid pace they set in the early weeks of the season.

Other standouts include the (truly mighty) Anaheim Ducks; they are 4th in Shots For, 2nd in Shot Quality, and with a shooting percentage that is basically average, that lands them the 2nd-most Goals For/Game in the league. This is a seat-of-the-pants hunch, but I would suggest that Anaheim's offensive performance is likely to be more durable than Buffalo's. The Sabres' hot shooting is so far above the rest of the league (their Shooter Diff in Goals/Game is more than twice that of 2nd-place Nashville), it looks like a hot streak that is bound to cool off. Again, just a hunch, but I'll check back on this in a couple months.

The recent offensive drought in Toronto may well be due to Shot Quality more than anything else. While 2nd in the league in Shots For, their Shot Quality is 6th-worst at 9.25%, and with subpar shooting, they're left with a middling 3.00 Goals/Game.

The goals seem especially hard to come by in Vancouver, where Shooting Percentage is a league-low 6.93%, 2.5% below what their Shot Quality would dictate. Instead of boasting an average offense (2.95 Expected Goals/Game vs. 2.92 Average), they're worst in the NHL at 2.17 Goals/Game. I'll leave it to Canucks fans to discuss which of the departures of Todd Bertuzzi, Ed Jovanovski or Anson Carter had more to do with this.

As always, take a look at your favorite team's results, and ponder what they might need from Santa this holiday season. A wicked sniper? A playmaking center? Just remember, even jolly old Santa has to abide by the salary cap.... 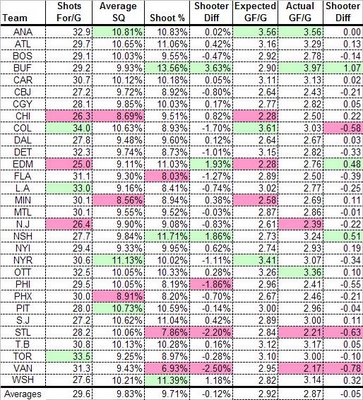