The Southeast Division is home to the last two Stanley Cup champions (I know it's true, but it still seems wierd to write that), but this season we've seen a new power emerge in the Atlanta Thrashers. While Atlanta chases down their first division title and/or playoff berth, and Carolina has steadily lingered a few points back, the only real movement of late has seen the Tampa Bay Lightning pull ahead of the Washington Capitals for the 8th and final playoff spot in the Eastern Conference. The other model of consistency has been the Florida Panthers, slinking around the division basement due in part to a league-low five road victories.

But underneath their positions in the standings, how have the overall offenses and defenses in the Southeast fared so far this year? Let's break them down team-by-team, focusing on the rolling 10-game averages for Actual (in red) and Expected Goals (in blue), both For and Against. As a guideline, NHL teams on the whole are averaging 2.97 goals per game, so in the graphs below, like for variation from that 3.00 level as an indication of your best and worst performers. Again, "Expected Goals" is a measure of Shots multiplied by the average Shot Quality, and reflect the number of goals for or against, given perfectly average goaltending.

ATLANTA THRASHERS: When I looked at the Thrashers' offensive output last week, there was hope that a spell of cold shooting might be coming to a close, but that hasn't been the case, and even worse, the trend in Expected Goals (in blue) is still heading downwards, now dipping below the 3.00 mark. Uh oh... 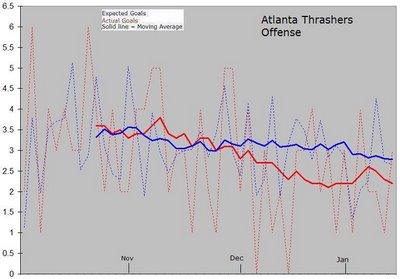 Defensively, the Expected Goals trend has been creeping up around 3.50 goals against per game, which would rank them well below the league average in goals against, but goaltending has apparently made a big difference for the last two months; notice how the red Actual Goals line has persistently stayed below expectations since late November. That's what has kept the Thrashers playing .500 hockey recently; if the offense doesn't recover or the goaltending cools off, Atlanta may well give up that first place position before too long. 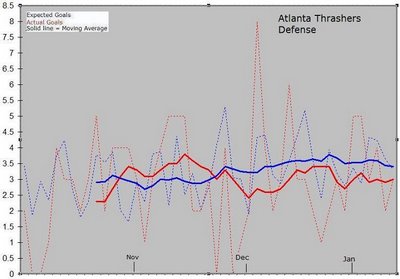 CAROLINA HURRICANES: The defending Stanley Cup champs have had a rough time lighting the lamp over the last two months, as their Actual Goals have trailed behind expecations by about 0.5 goals per game since early December. I'd be interested to hear from Hurricanes fans what factors might be at work here - elite opposing goaltenders, warped sticks, too much barbecue in the pregame meal...? 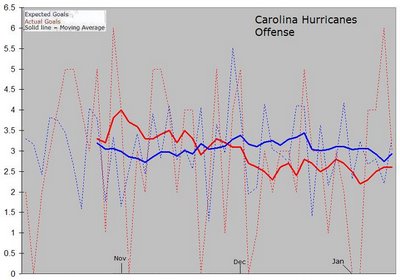 In their own end of the ice, the Hurricanes started off the season playing fairly poor defense, as seen where both the Actual and Expected Goals Against lines start around the 3.5 level in early November. Over time, however, things have settled down around the 3.0 midrange, with Actuals and Expectations tracking closely together. Hardly outstanding, but probably enough to keep them close on Atlanta's heels. 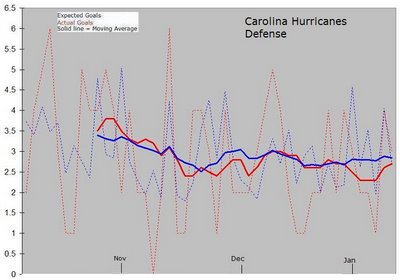 TAMPA BAY LIGHTNING: Following a hot streak in early November (when the Actual Goals average topped four goals per game), the Lightning have generally stayed above average in terms of offensive production, but a lingering New Years hangover has seen them slip markedly over the last two weeks. Opposition goaltending doesn't appear to be a big factor here, as Actual and Expected Goals are both heading downwards. 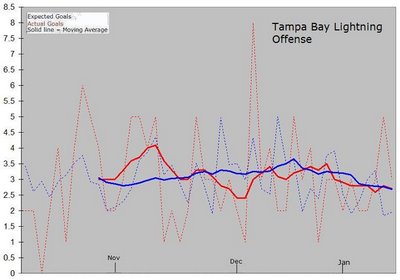 Defensively, the Lightning skaters have been outstanding for most of the season, as the blue Expected Goals Against line has typically remained below 3.00, even creeping under the 2.5 mark for most of December. Goaltending has let them down, however, as a steady gap relative to Actual Goals Against has kept their overall defensive numbers below average. Lately that gap has closed, and the goalies will have to continue holding up their end of the bargain if the Lightning are going to return to the playoffs. 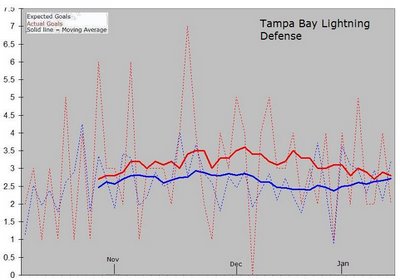 WASHINGTON CAPITALS: The basic picture here is one of a slightly above-average offense that had a nice hot streak in early December, but has come back to earth since then. While the Caps have some promising young talent up front, they just don't have the depth to outscore teams on a consistent basis. 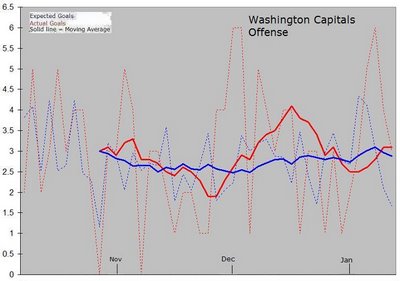 One of the great feel-good stories in the first half of the season has been the play of veteran goaltender Olaf Kolzig, who basically held the team together through the first two October and November. Note how the Expected Goals Against ranged precariously between 3.5 and 4.0 per game, but Olie the Goalie kept actual performance about half a goal per game under that level, encouraging Caps fans that their young squad might make the playoffs this year, or even contend for the division title. Over the last six weeks, we've seen the Expected value come down somewhat (still subpar, but not horrible), but the goaltending isn't outperforming like it was earlier in the year, and unless that turns around, the Caps are headed for another early start on summer vacation... 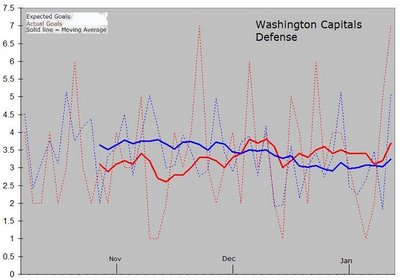 FLORIDA PANTHERS: It seems like the Panthers are the perennial "next up-and-comer" franchise that experts predict great things from, but until mid-December, the only place these kitties were performing was in the litter box. Both Actual and Expected Goals For were stuck around 2.5 for weeks, as the team languished near the bottom of the Eastern Conference. Starting with a 6-3 victory over the Bruins on December 16th, however, the Florida offense has roared to life, including a couple 7-goal efforts against Washington (last Saturday) and Toronto (on Dec. 19th). Veteran forwards Jozef Stumpel and Gary Roberts are mixing well with youngsters like Nathan Horton to complement team captain Olli Jokinen, who at age 28 is hitting his prime. 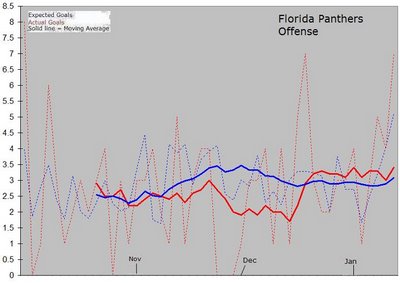 In their own end, however, Florida sure does miss Roberto Luongo, who was dealt to Vancouver during the offseason. Ed Belfour and Alexander Auld are doing a serviceable job (notice how close the Actual and Expected Goals Against trends have been), but Luongo's previous years in south Florida were among the best in the league in terms of outperforming expectations. As far as the skaters are concerned, the Panthers have slowly but steadily improved on defense over the course of the year. Despite their current 14th place standing in the East, only seven points are keeping them out of a playoff spot, and with 35 games left to play, that offense might just give the Panthers a chance at playing meaningful hockey this April. Will the experts finally be right this year, and see the Panthers make good on all that potential? Call me crazy, but just as I found last week when I looked at the Northwest division, I'm finding the most positive trends associated with the current last place team (since that article, the Wild have pulled ahead of Colorado and Edmonton, and are only one point out of first). 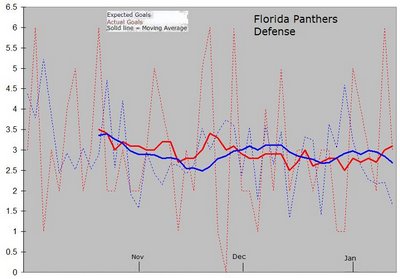