Having recently examined the hot and cold individual shooters in the NHL, it's time to look at some team-wide performances, focusing on the leaders in the Atlantic and Southeast divisions.

Early in the season, the Atlanta Thrashers were one of the feel-good stories of the NHL. Still searching for their first playoff appearance, they charged out of the gate and by early December, after their first 29 games, looked ready to run away with the Southeast division. The offense was averaging 3.48 goals per game, but a little over a month later, they've failed to maintain that momentum, playing .500 hockey since then and averaging only 2.38 goals per game. Fortunately for the Thrashers, the competition chasing them is flailing around the .500 mark as well, but does this offensive swoon mean that another regular season will end in disappointment? Perhaps not...

The graph below shows the overall offensive trend for the Thrashers so far this year. The red dotted line shows (non-empty net) goals scored in each game, with the solid line showing a 10-game moving average. The corresponding blue lines represent the Expected Goals, which is simply Shots Per Game multiplied by the average Shot Quality (put simply, closer, more dangerous shots merit higher Shot Quality). What we see here is that starting on December 7th, after a 8-0 stomping by the Tampa Bay Lightning, a wide gap grows between the Expected Goals per game and the Actual figures, which has closed to almost nothing recently. What that means is that the Trashers have suffered a spell of either poor shooting on their part (stuffing close-in shots into the goaltender, for example), or hot goaltending on the opposite end. In terms of generating a decent number of quality scoring opportunities, however, they've been pretty consistent; a moderate long-term drop in Expected Goals from around 3.5 to 3.0, but nowhere near as severe as the Actual Goals. 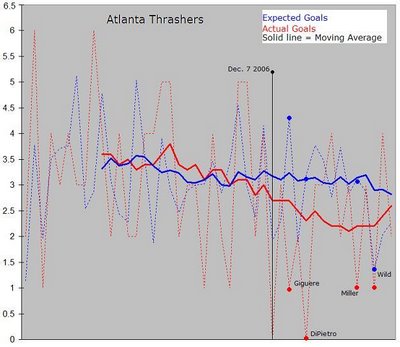 There are four noteworthy games in here worth pointing out. The data points marked "Giguere", "DiPietro" and "Miller" all represent 1-goal or shutout efforts against opponents that rank among the leaders in save percentage. The "Wild" note is interesting not so much because the Thrashers only scored one goal, but that the Expected Goals value for that game was only 1.34, the second-lowest figure all year for Atlanta. In other words, they just got shut down, only generating 15 shots total.

What we see towards the right edge of this graph is that the gap between actual values and expectations has closed to a neglible amount, so perhaps fortunes are turning, and the Atlanta offense is coming back to normal. While that in itself is good news, "expectations" have crept down close to 3.00 goals per game, and with a defense giving up roughly the same amount, that means the Thrashers are looking at playing .550 hockey going forward*, which may not be enough to hold off the Carolina Hurricanes.

While analysis like this can reveal a team experiencing a hot or cold phase, it can also provide validation for certain trends as well. Take for example, the New Jersey Devils. Back in late November, they were in the midst of a four-way Atlantic horserace that saw the Islanders, Rangers, Devils and Penguins seperated by a mere three points in the standings. Since then, however, New Jersey has stretched to a six-point lead over the Rangers with two games in hand, due largely to an offense that squeezed out 2.32 goals per game early on, but has clipped along at 3.10 since then. 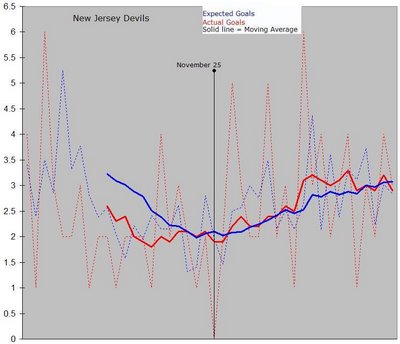 Note the graph here, where we see the Expected and Actual lines pretty much walking along in lockstep, but with a distinct upwards path since a November 25th 2-0 loss at the hands of the San Jose Sharks. The Expected Goals per game has basically gone from 2 to 3, closely matching the performance noted in the paragraph above. Maybe there was something special in the Thanksgiving team meal in New Jersey, but regardless, there has been a steady improvement in their offensive play over the last six weeks which bodes well for their chances to pull away from the rest of the Atlantic pack. Even with an average offense, that league leading defense will win them plenty of games.

*Why .550 and not .500, do you ask? Because of overtime losses which still earn a team 1 point in the standings. Typically, a team that scores and gives up an equal amount of goals will end up around a .550 winning percentage, rather than .500.