Mopping Up The Central

Share All sharing options for: Mopping Up The Central

Last Friday I touched on the leaders in the NHL Central Division, Nashville and Detroit, but now let's catch up with the rest of the pack. Again, we're looking at trend lines reflecting Actual (red) vs. Expected (blue) Goals on the offensive and defensive side. In general I've tried to keep the preceding graphs relatively free of "visual commentary", but since each of these teams have changed their head coaches already this year, I've put indicators in reflecting those milestones. So let's meet our contestants...

ST. LOUIS BLUES: The Blues have been on fire since Andy Murray took the helm, going 12-4-4 in eighteen games. Looking at the Expected Goals For trendline doesn't seem to indicate any huge change in offensive approach, but the steady increase in Actual Goals For seems to say that something is indeed in the works in terms of shot execution. We'll know the answer to that shortly after the All-Star break, in terms of whether that hot streak of recent days (16 goals in 3 games) continues. 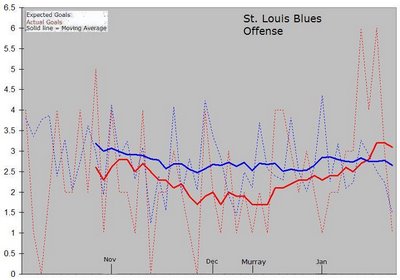 Take a look at the graph below, and you ask youself, what the heck did Murray tell those Blues goaltenders when he came on board? While the overall trend in Expected Goals Against has remained north of the 3.0 "mark of mediocrity", Actual Goals Against has plummeted, due in part to three shutouts this month, including a recent 1-0 effort in San Jose. They're going to need that strength in net if the Blues even want to think about challenging for the final Western Conference playoff spot this coming spring. 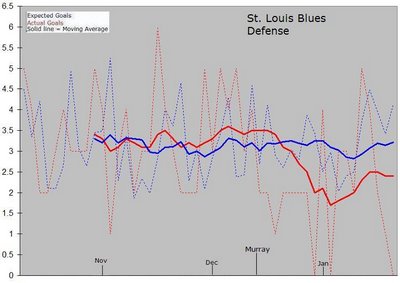 COLUMBUS BLUE JACKETS: In terms of quantity and quality of shots taken (Expected Goals), the Blue Jackets have been steady underperformers, lingering mostly around the 2.5 goals per game level. Worse yet, goal production early on failed even to live up to those underwhelming standards, as Actual Goals For was mired around 2.0 throughout November. Perhaps there was some short-term increase in focus that led to scorers actually capitalizing on more of their opportunities after Ken Hitchcock was hire, as Actual Goals perked up for a few weeks, but since the new year things seem to be headed back to normal in Columbus (that would mean, "awful"). 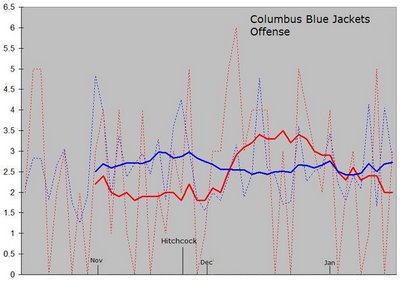 Defensively, the Blue Jackets' skaters have actually done a fairly good job over the course of the year, holding steady between 2.5 and 3.0 Expected Goals Against per game. The goaltending appeared ready to shoulder its share of the burden as well, but right about where that red line bottoms out in mid-December, Pascal Leclaire injured his knee and in the meantime Fredrik Norrena and Ty Conklin haven't gotten the job done. 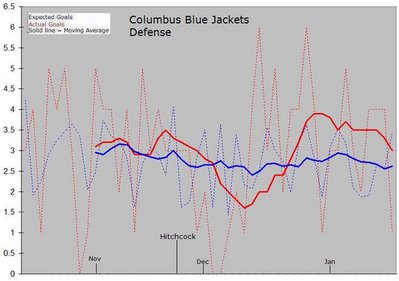 CHICAGO BLACKHAWKS: While injuries have played a significant role in Chicago's offensive woes this season, it does appear that new head coach Denis Savard is breathing life into the Blackhawk attack. From a nadir of 2.0 Expected Goals per game when he was hired, Savard now has his charges generating quality opportunities on a nightly basis. If actual results come back close to expectations, Chicago could put up a fight against most teams going forward. 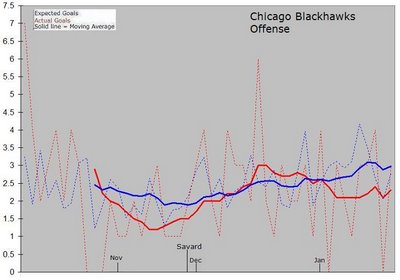 But while everyone has focused on what impact Savard would have on the Chicago offense, the encouraging part of his tenure might well be found at the other end of the rink. For most of the season goaltending has been keeping the Hawks somewhat competitive (note how throughout November and December, Actual goals came in well under Expected), and team defense has generally been subpar. About four weeks ago, however, the trend in Expected Goals Against crossed below 3.0 per game, and has stayed in that territory ever since. Is responsible team defense perhaps on the way in the Windy City? Even if it is, it may be too late to save this season. Befitting the fortunes of a last-place team, the goaltending apparently blew a gasket over New Years Eve. Recent results (8-3 home loss to Nashville Jan. 5, 6-3 loss at Detroit Jan. 13, 5-4 home loss to Columbus Jan. 16, and 6-3 loss at Nashville Jan. 20) indicate that the wheels may well be ready to fall off the proverbial wagon. 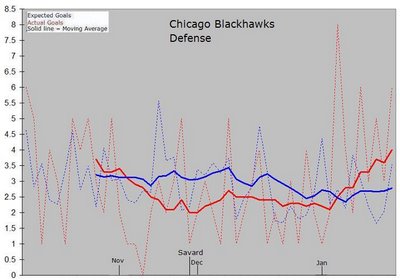