I just wanted to pass along a quick thought-provoker before heading down to the GEC for tonight's Ducks/Predators game. Just examining the offensive side of the game, it appears that Anaheim is going through a slow yet persistent offensive slide, whereas the nature of the Nashville offense is changing. 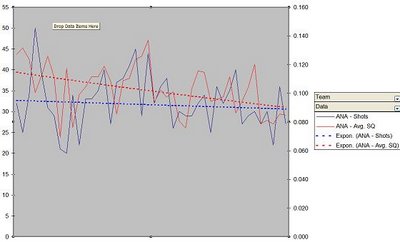 Here's a snapshot of what the Ducks have been up to. The blue lines represent shots per game (dotted indicates the trend), and the red ones represent average Shot Quality. Anaheim's overall shot totals are pretty stable, but the SQ trend line is sharply negative. With .100 being a league-wide average, they've gone from the penthouse to the outhouse, including five straight subpar offensive showings. Besides the injuries in goal and on the blue line, that's a worrysome trend for Randy Carlyle and crew. 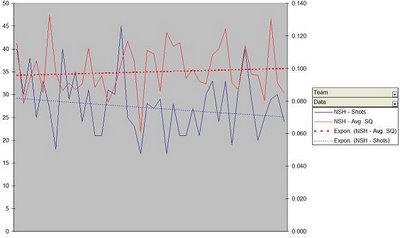 As to Nashville, they've seen Shots Per Game decline slightly over the course of time, but an increase in average Shot Quality helps neutralize that effect. Their overall offense isn't surging or declining, but rather they seem to be taking slightly fewer, albeit more dangerous, shots.

Sorry for the rushed nature of this post, gotta head out the door. Come back in the days ahead for more thorough analysis of particular teams which may go shopping ahead of the trade deadline...