Update (April 24, 2009): Earlier this year Mirtle made a trip to assess the Nashville hockey scene with his own eyes, and I highly recommend his series of articles on the subject.

A tireless refrain from the Canadian media is that Nashville is an absolute failure as a hockey market, and failing to move the team north of the border is an exercise in folly by the NHL.

Our latest exhibit comes from James Mirtle, usually one of the more thoughtful hockey bloggers extant:

But Nashville, quite simply, has proven it cannot sustain an NHL hockey team. Even with the lowest ticket prices in the entire league (I know: I've looked into flying there for a game or two) and a ridiculously forgiving arena lease, the team has had attendance issues despite having one of the best records in the league.

It's not a matter of Canadians not wanting teams in the southern U.S.; I've argued time and again in favour of teams like Dallas and Tampa Bay that have supported their teams and really brought something to the table in terms of bringing news fans and new energy to the game. That's a good thing.

The Predators, however, are not that, not in the beginning and certainly not now, and they never will be. Even with an owner as forgiving and deep-pocketed as Craig Leipold, the experiment has failed miserably, and the team will be leaving as soon as it can extricate itself from its lease agreement.

Once again, we're caught having to fend off the vultures who want to write off Nashville as a lost cause prematurely. There's no doubt that establishing a hockey fan base in foreign territory is a long term proposition, but one shouldn't discount the fact that when talking about Dallas and Tampa Bay, they've had Stanley Cup championships to build around, which provides a huge bandwagon effect. The Predators have yet to come anywhere close to that kind of postseason success, since they've never made it past the first round, which was a particular disappointment the last two years after earning home-ice advantage. 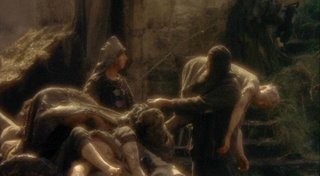 "I'm not dead yet... I just bought my Radulov jersey!"

So where to begin the dissection? Let's start with "the lowest ticket prices in the league". According to Teammarketing.com's survey, Nashville comes in at #19 in the NHL for average ticket prices, not #30 after all.

Secondly, paid attendance figures are on a clearly positive track. I got paid attendance averages for previous years from John Glennon at the Tennessean, and the darkest days are clearly in the rear-view mirror, with the team not far from getting back to the strong level of support seen in the first two seasons: So what caused that ski-slope decline from 2000-2003? Let's think back to that bandwagon effect, and remember that in the fall of 1999, the NFL's Titans came to Nashville, appeared in Super Bowl XXXIV, and for the next few years were a strong team led by a league MVP in Steve McNair, making an AFC Conference Championship appearance in 2003. During that time, the Predators fielded a patchwork team that was clearly uncompetitive, and merely aspired to a .500 record, let alone a playoff appearance. It's no wonder that under those circumstances attendance suffered. In an established hockey market like St. Louis or Chicago they refer to hockey-savvy customers not buying what ownership is selling, but in Nashville it's deemed a congenital defect in the market.

It takes time to rebuild from that deep a trough, but since the nadir of 2002-3 paid attendance is up over 30%, and efforts this summer appear to be building momentum towards continued improvement this upcoming season, making it likely that the magic 14,000 mark will be surpassed. Obviously, the goal would be to get that figure more towards 16,000 or higher, but the biggest factor there is seeing some genuine playoff success in Nashville to get casual fans more deeply involved with the team. Last year was the first time the team was felt to be a real contender heading into the regular season, and their playoff flop against the Sharks was a huge disappointment. If they had made it into the second round the average attendance would have topped 14,000, and we likely wouldn't be having this story to talk about this summer. Regardless, many critics say that lackluster support for a successful regular season is a hallmark of failure. But having been told for so long that the regular season doesn't matter, what should we expect?

So much of the discussion in sports media over the last several years has been that "the regular season doesn't matter, only championships do." We see captains refusing to hoist the Campbell Bowl or Prince of Wales Trophy, and generally treating the President's Cup like it was Aunt Millie's ancient fruit cake getting passed around the table. When you consistently hammer home that message, why should anyone be surprised that support wasn't surging just because the team was in 1st place back in December? In my mind, professional sports in general needs to reconsider that message, as the bread-and-butter of their business is the regular season - you shouldn't tell folks that they're paying thousands of dollars to see games that don't really matter.

In short, this patient isn't dead yet, and is in fact making strong progress (note how quickly all the home playoff games sold out this spring). What this is really all about is a hockey mad country that is enjoying a flush of economic purchasing power, and has powerful Canadian Loonies burning holes in it's collective pocket. Currency swings can be unpredictable however, and if this tide reverses, we could see the Calgary's and Edmonton's of the league crying poor once again: The Canadian dollar has soared against US$ since 2003.

Remember that NHL player salaries are paid in US dollars, so over the last few years a Canadian ticket price that just stays flat is able to buy 50% more player on the open market. It's no wonder they want another franchise so desperately. At the moment, they could easily support a competitive team.

There's no question in my mind that Canada should get an expansion team well ahead of Kansas City, but Nashville shouldn't be tossed off as a failure just yet. Momentum is on the upswing in the Music City, a prosperous, growing area that can certainly support an NHL team over the long term. Maybe Craig Leipold doesn't have the wherewithal to make it through these lean times to see that stage occur, and that's unfortunate, but fresh ownership that commits to winning can make it happen.

In short, don't confuse the desire for another Canadian team with a judgment that Nashville is a lost cause. Those two points aren't intertwined, and if Mr. Balsillie is so hell-bent on owning a Canadian franchise, then he should certainly be able to outbid other would-be expansion groups in order to make that happen. That, at least, is one certain way that he could line the pockets of current ownership and avoid thorny legal battles on his way into the NHL club.