The Great One sounds off on the Predators

Share All sharing options for: The Great One sounds off on the Predators

In their never-ending series of articles trying to make the Nashville Predators' relocation to Hamilton seem like a done deal, today's Globe & Mail has an article citing an interview with Wayne Gretzky, in which he lauds the support for hockey in Hamilton and tells the fans in Nashville, "that's business, that's life." 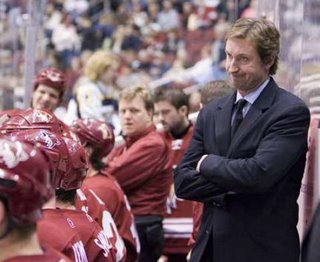 You'd look like this too after two straight years in the Pacific Division basement.


Well, you have to give them some credit. If there's anybody in the league who's an expert on disastrous hockey failures in the southern US, it's gotta be Coach Gretzky.