Saruman didn't have to worry about free agency

Share All sharing options for: Saruman didn't have to worry about free agency

The one guy you have to feel for over the next few weeks is Nashville Predators GM David Poile. After rolling the dice on Peter Forsberg and seeing his team falter in the first round against San Jose, he's been given immediate orders to slash the payroll by current owner Craig Leipold, and faces an uncertain future if the sale of the team goes through, which often carries with it a thorough changeover in the front office.

His immediate focus, then, is to assemble the best team he can while taking roughly $7 million off last year's payroll figure of nearly $40 million. Oh, and he has to overcome the obstacle of signing players who might be concerned about where they'll be playing in future years. When Saruman got his orders to build an army "worthy of Mordor", he certainly didn't have to deal with austerity budgets and hesitant free agents. He just started ripping trees down and cranked out the troops. Unfortunately for Mr. Poile, no such options are available at this time... 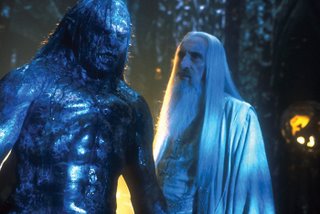 So... how are those backward crossovers coming along?

So then, what to do? Yesterday's trade that sent Kimmo Timonen and Scott Hartnell to Philadelphia for a first-round pick was a good start. Poile knew he wasn't going to keep those players (especially given the enormous, 6-year deals they received), so at least he got a high draft pick back in his hands. From there, he has to look at what he currently has in terms of player contracts for 2007-8:

That represents a current total of $28.8 million, and that's before even attempting to re-sign any restricted or unrestricted free agents like Paul Kariya, Greg Zanon, etc. The good news, at least, is that this is still the core of a very good NHL team. All of the above with the exception of Peverly and Tootoo would be considered above-average NHL players. The bad news, of course, is that there are about six spots to fill for a typical nightly lineup, and Poile needs to do it without creeping much above the CBA-dictated salary minimum of $33 million (per Spector).

Here's the plan, then - first and foremost, he'll have to trade Tomas Vokoun. As depressing as that might sound to Nashville fans, the Predators currently enjoy an embarassment of riches in goaltending, and Vokoun's $5.3 million salary this year is a luxury that Poile just can't afford any more. And if any team boasts a #2 that is ready to step up as a big-time starter, it's Nashville. Chris Mason's standout performance last season (when he finished second in save percentage behind Nicklas Backstrom) should make this pill a little easier to swallow.

So who might be in the market for a goaltender like Vokoun? Phoenix, for starters, but as shown with the Philly deal, I think Poile would rather send talent out of the Western Conference. That leaves Toronto as another likely spot, with the Preds possibly interested in a young center like Matt Stajan, or a defenseman like Hal Gill, along with a draft pick. Remember, this isn't about getting equal value in talent - it's about maximizing what Poile can get for the assets he's got, and the salary limitations he's under.

The other high-price player on the team that might warrant moving would be Marek Zidlicky, whose $3.2 million price tag looks mighty hefty after the significant dip his offensive production took last season. There are plenty of affordable options on the market this summer for veteran blueliners, so this might be an attractive way to shave $2 million off the payroll.

Among the current Predators that Poile has the opportunity to re-sign prior to free agency, the good news there is that many of these players should be able to be retained for modest figures, like Vernon Fiddler, Jerred Smithson (see update below), Scott Nichol, and Greg Zanon. If he could bring those four players back from something around $3.5 million total, and reduce the goaltending payroll by $3 million+ by moving Vokoun, he might actually leave himself room to pitch Paul Kariya an offer somewhere close to his current salary ($4.5 million) in order to stick with the team one more year. What is becoming apparent is that we certainly won't see Kariya and Vokoun together in Nashville this upcoming season. For one to stay, the other would certainly have to go.


If all this were to happen, local fans would still have plenty to be excited about for the upcoming season - you'd still have a deep set of forwards, plenty of young talent on the blue line, and a starting goaltender in net that had fans buzzing over his performance last winter. Emotions are running high these days in Nashville (and Hamilton), with each side either despairing or gloating about this team folding up shop and heading north sooner or later. In the meantime, all David Poile can do is work with the situation at hand, and for Predators fans, they should feel fortunate to have a steady hand at the helm during these stressful times.

UPDATE: The Tennessean reports that Jerred Smithson has re-signed with the Predators for two years, averaging $500K per season, up from $450K last year.