Another day, another signing

Share All sharing options for: Another day, another signing

On the heels of a convincing 4-2 victory over Columbus last night, the Predators message boards lit up with a rumor first posted during the game that J.P. Dumont had come to terms on an extension to stay in Nashville.  TSN is now reporting this as well, four years for $16 million. 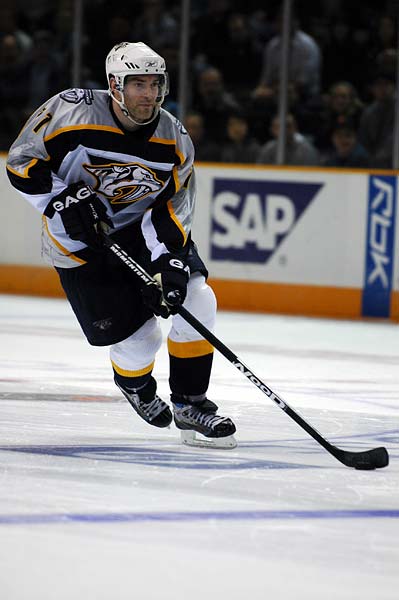 Sorry, playoff contenders, hands off our UFA!
(Photo Jon Swenson/Sharkspage.com)
One of the hottest players in the NHL in recent weeks, #71 is riding a 16-game point-scoring streak, including two assists last night.  He's enjoying a stellar season, on track for 28 goals and 71 points, both of which would be career-highs. and has helped ignite Nashville's leading goal-scorer, Alexander Radulov, who has blossomed since joining Dumont and Jason Arnott on the top line.
I'm sure this signing comes as a crushing blow to guru's like ESPN's Scott Burnside, who recently wrote, "does Dumont want to stick around a team that has a limited future in Nashville?"  Methinks Dumont and his agent have a better understanding of the Predators future in Nashville than a sportswriter in another city, Mr. Burnside.  Had he tested the waters of free agency, it's quite likely that Dumont could have gotten more money elsewhere.
The new ownership group is doing all the right things so far, locking up David Legwand, Jordin Tootoo, and now J.P. Dumont to contract extensions.  They've been going back to basics in terms of marketing and promotions (eliminating the Premium Plus pricing, introducing new options like the Family Pack and Captain's Pack), and have reached out to the community by holding nights honoring local high school championship sports teams.  There's no single stroke that will ensure continuous sellouts in Nashville, but the new regime is turning it around and heading in a very positive direction.