Share All sharing options for: Ryan Suter, Live on Stage

I just wanted to pop up a pointer to a nice article by John Glennon (Predators beat writer for the Tennessean) in this month's USA Hockey magazine, about the development of Ryan Suter into a regular, productive NHL defenseman.  While occasional miscues drive some fans to fits and have them musing about what he might bring in trade, it's worth remembering that Suter just turned 23, and is currently in only his 3rd NHL season. 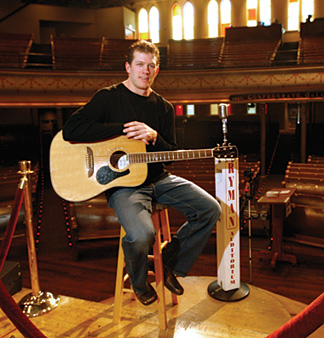 Suter on stage at the Ryman Auditorium in Nashville
In spite of a few setbacks (such as the Brendan Witt trade in 2006 that cost him playoff playing time), Suter's improved each year so far, and looks to be a capable top-four defenseman for years to come.  Assuming GM David Poile locks up this pending Restricted Free Agent in a new contract, he'll be a key player in a deep, talented blue line corps that already has Dan Hamhuis, Marek Zidlicky, Greg de Vries and Greg Zanon locked up through next season (Hamhuis and Zidlicky are signed through 2009-10 as well), and as the cherry on top, it's expected that Shea Weber will be signed, too.  Just as in the 80's with his Washington Capitals teams, Poile has stocked his cupboard full of quality defensemen, even in spite of having to trade former captain Kimmo Timonen in last summer's salary purge.