Swedish Twins Stink It Up, But Luongo Saves The Day

Share All sharing options for: Swedish Twins Stink It Up, But Luongo Saves The Day

The Predators simply ran into the best goaltender in the world last night, firing 51 shots on Vancouver's net yet still coming up short in a 3-2 shootout loss.  It took a 3rd period goal by Marek Zidlicky to tie things up at 2-2 and send the game to overtime, earning Nashville at least one point for their efforts, but Roberto Luongo simply put on a show, and demonstrated why nobody will want to face the Canucks in the playoffs this spring.  Predictably, he stuffed all three Predators in the shootout to earn the victory.  Frankly, I think the NHL needs to take another look at his equipment; not about the size, but I suspect that he's using some sticky, marshmallow-like material in his leg pads, as the pucks never seems to pop back out once Luongo makes a save. 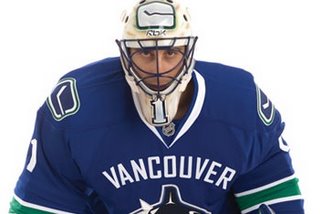 Yes, he is indeed #1
Things very nearly took an entirely different course early in the game when Dan Hamhuis fired a shot on Nashville's first power play that Luongo snagged with his glove.  The ref ruled it a clean save, but it went to video review as to whether the puck had crossed the line before Luongo pulled it back out; the video was inconclusive (although I'd say it was probably in, that just ain't good enough), so the game remained scoreless until a final-minute goal by Mason Raymond sent the Canucks into the locker room with a 1-0 lead.  Terry Crisp correctly pointed out that Matt Cooke interfered with Greg Zanon, which allowed Raymond to cut in front of the net for the score, but hey, if you can get away with it, it's a great play.
Jason Arnott tied things up in the second with a textbook power play goal, taking a crossing pass from J.P. Dumont and firing home a one-timer from his favorite spot, off to the goalie's right near the faceoff dot.  Seven minutes later, however, the Canucks pulled ahead again on a long shot from Alexander Edler that had plenty of traffic in front of Chris Mason, who seemed inspired by his opposite number and played an outstanding game himself.
Overall, the Preds put in a solid effort; the defense really stepped and contributed offensively (Shea Weber had 10 shots, Ryan Suter 5 and Marek Zidlicky 4), and the overall squad outshot Vancouver in every period.  As Zanstrom points out over at Waiting For Stanley, the Sedin twins weren't effective at all, and Henrik in particular looked out of sorts, retaliating at every percieved slight and taking bad penalties.  The worst was a high stick that Henrik got whistled for in the 3rd, which gave the Predators the power play on which Zidlicky scored to tie the game.
The OT loss leaves Nashville, for the moment, tied for 5th in the West alongside San Jose, with Vancouver and Calgary two points behind.  The kicker is that all three of those teams hold two games in hand in the Preds, so effectively it's a four-way logjam.  If they keep playing like they did last night, Nashville will be in fine shape, but the key is to put frustration out of the way ASAP, and prepare to face a red-hot Dallas Stars team Saturday night at the Sommet Center.  They'll do so without veteran winger Martin Gelinas, who suffered a knee injury in the 2nd period and is being evaluated today.