Predators Prospects On The Ice

Share All sharing options for: Predators Prospects On The Ice

I took the chance to head down to Centennial Sportsplex and catch Day One of the on-ice portion of the Nashville Predators Prospects Camp, and while you can't glean much from one hour of a moderately paced practice, it was fun to take two of my kids along and let them see the young guns who hope one day to achieve NHL stardom.

What follows are a few snapshots I took during the session. Keep in mind that I'm officially a middle-aged father of 3, the kind of guy who one day you'll catch wearing black socks with sandals, so please forgive the quality... 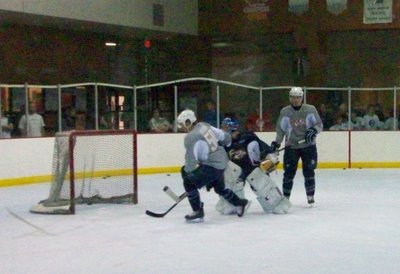 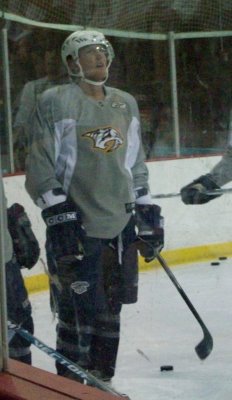 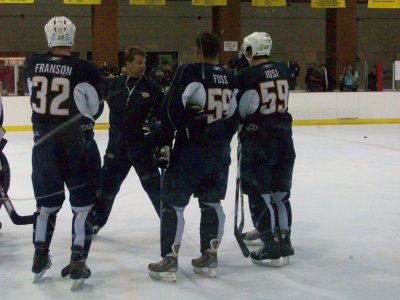 Some of the defensemen got special attention at our end of the ice. Here, Nashville's 2008 2nd-round pick, Roman Josi (#59) and 6th-round pick Jeff Foss are towered over by the 6'5" Cody Franson.

There were many others of note that I didn't get good pictures of: Triston Grant, the newly acquired tough guy from Philadelphia, and Blake Geoffrion, who just wrapped up his sophomore season at the University of Wisconsin. I didn't notice last year's 1st-round selection, Jonathan Blum on the ice, nor were young wingers Antii Pihlstrom or Jonas Hornqvist, who are often mentioned as possibilities to make the big squad this fall.

I hope to catch tomorrow's session as well, and if I catch anything blogworthy (admittedly that's a pretty low threshold), I'll plop it up here.

BONUS: To keep you busy until the July 1 free agency period kicks off, head over to Paul Nicholson's Geek Thoughts for an interesting meditation on nationalism in hockey. I was fortunate enough to catch up with Paul at the Prospects skate today after interacting online with him for over a year now...