John Glennon reports today that Shea Weber has signed a 3-year, $13.5 million deal, avoiding the trials and tribulations of restricted free agency. At $4.5 million per year, he leapfrogs Ryan Suter and Marek Zidlicky in terms of yearly salary among Predators defensemen, fairly close to the figures I guessed at a few months ago by comparing him not with Dion Phaneuf, but rather other young NHL defensemen entering their second contracts with similar levels of performance. 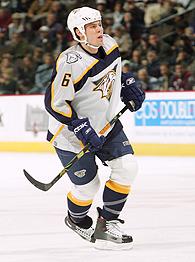 Watch those #6 jerseys fly off the shelves now...


By opting for a 3-year deal, Weber leaves plenty of opportunity to earn major dollars relatively soon. If he can maximize the potential that Preds fans and coaches see day in, day out, he'll earn that big-time payday in the summer of 2011.

So now that Nashville's top six defensemen from last year (Weber, Suter, Hamhuis, Zidlicky, de Vries & Zanon) are all under contract, what will become of restricted free agents Kevin Klein and Ville Koistinen, and other young prospects like Alexander Sulzer and Cody Franson? As I mentioned last week, the glut of defensemen in the early stages of their career threatens the development of those left either in the press box in Nashville or down in Milwaukee, when instead they might be better served by seeing at least semi-regular NHL action. There is still plenty of time left this summer (and probably well into the next regular season) before that logjam must be cleared, but if I were to guess, I'd say that Greg de Vries might make the most sense to move. While he's a solid veteran performer, the core of the defensive group has largely worked through their rookie stage, and there are usually several teams on the lookout for a greybeard like de Vries to come in and provide leadership. At this point, even a minor deal for relatively little hockey value might prove a huge benefit to the team, by opening a spot for one of the younger blueliners to prove his worth.