Share All sharing options for: The 2008-9 Forechecker's Forecast: Radek Bonk

Today's installment of the Forechecker's Forecast brings us to Radek Bonk, the veteran center who was acquired last summer to be "a big, experienced center that can play the shut-down defensive role and also fill in in more offensive situations," as GM David Poile said at the time. Since Bonk did a solid job in that role with the Montreal Canadiens for the first two years following the Great Lockout, there was reason for optimism that 1994's #3 overall draft pick would be the perfect fit to round out a center position that already boasted Jason Arnott, David Legwand, and Scott Nichol.

Bonk began the season anchoring a line with Jed Ortmeyer on the left side and Jerred Smithson on the right, but the ice seemed to tilt uphill for them, and that line's impact on the team's Plus/Minus in 5-on-5 action was nothing short of disastrous. The "Rating" value from Behind the Net describes the difference between a team's Goals For and Against numbers when a player is on the ice, as opposed to how they do when he's on the bench; in other words, that individual's impact on team performance. For Bonk, his -2.24 value (worst among regular players on the team) meant that goal scoring shifted dramatically against Nashville when he was on the ice. A similar effect is found if you just look at Shots For and Against, so it's not like Bonk was just the victim of unlucky goaltending. Unsurprisingly, Bonk finished the season with the NHL's worst showing in the standard Plus/Minus statistics, at -31.

One interesting side note about that last link; if you look at the top 30 centers (with at least 40 games played) in terms of the most Goals Against per 60 minutes of action, only three of them came out on the positive side of the Goals For & Against ratio; Buffalo's Derek Roy (3.87 GF, 3.19 GA), Carolina's Eric Staal (3.31 GF, 2.97 GA) and Ottawa's Jason Spezza (4.26 GF, 2.88 GA). Many high-profile offensive performers like Vinny Lecavalier may score a lot, but they give up a ton of goals, too. I used to notice the same thing about Mario Lemieux back in the early 90's.

Anyways, back to Bonk; on the positive side, during the first half of the year he worked the front of the net on the top power play unit, and provided an unexpected boost to that group. The highlight of his season would probably have been December 1, 2007 in Montreal, when he returned to play in front of the Habs' fans and drove a dagger through their collective heart by scoring a tying goal with under a minute remaining, and adding a goal in the shootout as the Predators escaped town with a win, despite trailing 4-1 with only 9:19 remaining in the third period. After that point, however, Bonk tallied only four more goals the rest of the way, ending up with 14 goals and 15 assists on the year. While those numbers pretty much fell in line with what was expected, it was the lack of "shutdown" hockey that proved baffling. 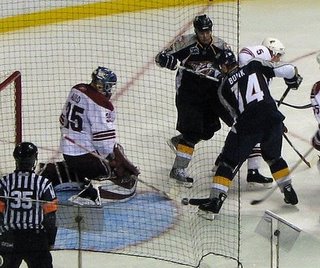 So what to make of this? The contrast between last year and what Bonk had done previously with Montreal and Ottawa suggests that something in the personnel mix or the Predators' system simply doesn't make a good fit with Bonk's game. Since he's under contract for a relatively affordable $1.6 million for just one more season, however, the team is likely to ride this out and see if things can be turned around while 2008 1st-round pick Colin Wilson plays another year of college hockey.

I suspect what will happen is that Bonk's line will get a bit more offensive punch on the wing, instead of relying on two pure checkers like Ortmeyer and Smithson. Mixing in a two-way plugger like Vern Fiddler or the shot-happy Jordin Tootoo might help. In terms of ice time, it wouldn't be surprising to see his power play time diminished in favor of younger players the team is trying to develop, and some of his burden shift towards penalty killing, where his solid faceoff work provides some value.