Share All sharing options for: Jason Arnott, the 2008-9 Forechecker's Forecast

In order to tide us all over until training camp opens next month, I thought I'd take a cue from Lowetide and some others by taking an early peek ahead to the 2008-9 season for individual members of the Nashville Predators. Hey, it's the middle of August, and there's nothing else to write about, right?

So what I've done is taken the current roster (minus the AWOL Radulov), added in a few others who are expected to make some contribution this year (Rich Peverley, Patric Hornqvist, Ryan Jones, Antti Pihlstrom) and tossed them into a virtual hat (OK, I used the Random function in Excel). This top-secret, classified ordering will dictate the sequence in which these previews will appear...

So first up on the hit parade? None other than your captain, #19, Jason Arnott... 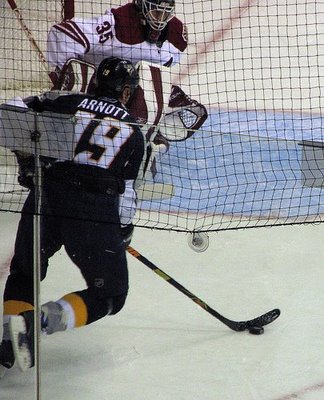 In 2007-8 Arnott stepped into the role of team captain amidst a summer of franchise turmoil that has been documented ad nauseum. In the end, he delivered one of the finer performances of his career, notching 28 goals and 44 assists to carry the bulk of the offensive workload alongside linemate J.P. Dumont. Outside of a tendency to take some unnecessary penalties and room for improvement on the faceoff dot, Arnott would appear to be in his prime productive years. The question, then, is how long we might expect that period to last; is the 33 year-old going to slow down soon?

To answer this question, I took a hop over to Hockey-Reference.com, a wonderful resource for stat freaks, and pulled down the statistical data for all centers since the 2000-1 NHL season between the ages of 32 and 36, to see if there was any discernable trend in performance.

Certainly nothing to worry about there; in fact, there may be reason to expect even higher levels of production for the next couple seasons. Yes, I understand there's some selection bias in the above table, as a player in decline may post poor numbers in the early columns, then not appear at all in the later ones, artificially inflating those averages, but this is close enough for blog work. For some specific comparisons, I pulled out of this data the player-seasons which correlated most closely with Arnott's 2007-8 campaign, based on most of the columns available on Hockey-Reference.com.

So how did these players fare in their next season?

In terms of goal-scoring, all three maintained the pace, with Modano falling off due to playing only 59 games in 2005-6. In short, I don't see any reason to believe that Arnott's production is headed into decline any time soon. His game is built on using his size and hockey sense to protect the puck as brings it into the offensive zone, and setting up to fire one-timers on the power play. He should continue to be a strong contributor in 5-on-5 hockey, and the top scoring option with the man advantage. In terms of Plus/Minus, Arnott has typically done well in that regard, especially in relation to his own teammates, and his years in New Jersey and Dallas have certainly ingrained in him a certain level of defensive responsibility, which obviously meshes well with what Barry Trotz expects from the Predators.

Where I could see a step backwards might be in Arnott's assist totals, depending on who takes Alexander Radulov's place on the top line. If he has to deal with a platoon of role players, that might hold back what was one of the NHL's elite lines last year. On the other hand, if the Nashville power play can ever get rolling, it could boost Arnott's numbers dramatically. Overall, Arnott's role on the team and ice time breakdown should remain consistent with what we've seen over the last two seasons (about 14:30 at Even Strength, and 4:15 on the power play per game).