Share All sharing options for: J.P. Dumont, the 2008-9 Forechecker's Forecast

When the Buffalo Sabres walked away from an arbitration award in the summer of 2006, making J.P. Dumont an unrestricted free agent, many approved of David Poile's subsequent signing of him as a savvy addition that would bring secondary scoring behind the likes of Paul Kariya and Steve Sullivan, who then led a deep Nashville attack. Two years on, Dumont is now wearing the "A", leading the charge up front along with Jason Arnott, and entering the first year of a new four-season contract paying him $4 million annually. Each of his two seasons with the Predators have seen progress in offensive production, so the main question with #71 is, has he reached his peak?

At 30 years of age, it would appear that Dumont is entering the prime years of his NHL career, and it might be reasonable to expect continuing, marginal improvement (in other words, a small step forward, but nothing like 100 points or 50 goals). Besides the usual offensive contributions like goals and assists, Dumont led the Predators with a +11 Penalty Plus/Minus rating, which all by itself was worth roughly a point in the standings. Basically, Dumont is a cool-headed playmaker, adept at finding the soft spot in an opposing defense and making himself available and ready to accept a pass and shoot away. The key for J.P. to keep both the level of penalty drawing, as well as overall scoring up, is to keep his feet moving in the offensive zone. At times, he tends to coast around the perimeter, rather than dig hard for contested pucks. 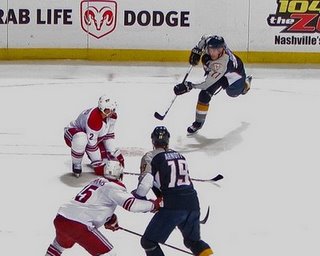 Looking ahead to 2008-9, it appears likely that further responsibility will be placed on Dumont's shoulders; another minute or so of ice time per game, perhaps, but not much more than that, which should increase his scoring chances. Any improvement in what was an awful Predators power play last year should boost his production as well.