Share All sharing options for: Kevin Klein: The 2008-9 Forechecker's Forecast

After previewing some grizzled veterans in the first two installments of these Forechecker's Forecasts, it's time take a look at a hockey player with only a handful of NHL games on his resume, Kevin Klein. After years of preparation as a hot defensive prospect, Klein is set to join the Nashville lineup full-time this fall, based on his new two-year contract that will pay him an average of $650,000 per season. 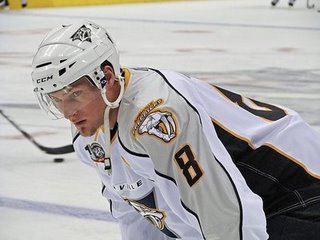 Is Klein ready to shine?
Photo courtesy of mark6mauno

Last year must have been frustrating for Klein, as he failed to make the big team coming out of training camp, and his early work in Milwaukee drew sharp criticism from Barry Trotz. Later on there was some experimentation with having him play wing in practice, in order to back up some banged-up Predators forwards, but that never panned out and Klein ended up dressing for only 13 games for Nashville, as Ville Koistinen jumped ahead of him on the depth chart. The time is definitely now for the 23 year-old, who, while having lagged behind his fellow draft classmates Ryan Suter and Shea Weber, still has plenty of upside to his game.

For a good example, check out the video highlights from the Oct. 25th game against the Atlanta Thrashers last season. He set up Jordin Tootoo for a goal with a great effort bringing the puck up through the neutral zone, blowing by one of the Thrashers and sending a perfect pass to Tootoo for the score. It was the kind of play that left fans hungry for more, but they're not going to get it unless Klein can show the consistent effort required to earn ice time each night.

Given the core group of defensemen that are entering their prime years in Nashville, Klein is likely going to play a part-time role as a 3rd pair/PK specialist this year, spending some time in the press box as well simply due to numbers. In the event of injury, I could see him getting a top-four job on an interim basis, but the Predators front office has usually shown a great deal of patience (some might say too much) bringing along young talent.