Share All sharing options for: Josh Gratton, the 2008-9 Forechecker's Forecast

Amidst the Radulov drama and the Marek Zidlicky trade, one roster move that's been somewhat overlooked involves the enforcer role, fulfilled the last three seasons in Nashville by fan favorite Darcy Hordichuk. The heir apparent to that job is Josh Gratton, a dedicated knuckle-duster who played all of 1 NHL game last year, and 52 the year before for Phoenix. I'm guessing that this is a fan-created site and nothing that Gratton himself has created (although "Chin of Steel" is certainly a moniker worth promoting). 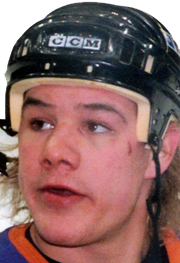 Coming soon to a fist near you...

Other than finishing 2nd in the league with 188 penalty minutes in the 2006-7 season, Gratton's NHL-level resume is pretty thin. Basically, there's not much there to suggest that Gratton will bring anything to the Predators' on-ice performance that any other goon (err... enforcer) would. As James Mirtle so ably pointed out earlier this summer, guys like that don't play a lot, and don't do much to help their hockey team win when they're on the ice. Basically they're turning into the NHL's form of risk management. You keep a guy like Gratton on the bench until you're concerned that your opponent is taking liberties with your stars; then you send him out to do his duty, since you'd rather have him risk injury than one of your core players.

It seems to me that in the modern NHL that's pretty much a waste of a roster spot, and personally I'd rather see a no-defense puck-dangler get that limited action each night, perhaps as a cameo PP guy and shootout specialist.