Share All sharing options for: Ryan Suter, the 2008-9 Forechecker's Forecast

One of the questions that Nashville Predators fans worried over earlier this summer was whether the team would be able to retain both Ryan Suter and Shea Weber, the two high-profile restricted free agents due for major pay increases. Now that he's locked up for four more seasons at $3.5 million per, the focus shifts to how much of a step forward Suter will take as he shakes off the young rookie label and fills a key role on the Predators blue line. 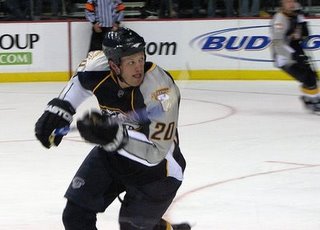 Over the course of three seasons, Suter has steadily progressed into a solid two-way performer, and a key cog on the power play. He became much more aggressive offensively last season, firing 138 shots (compared to 87 the year before), presumably due to an increased opportunity working the point with the man advantage:


Basically, Suter's been getting an extra shift per game at even strength each year, and has grown into a pivotal role on the power play. Shorthanded work is pretty consistent (just over 2:00 per game each season), and with guys like Hamhuis, De Vries, and Zanon around, Suter doesn't need to spend much time on the kill anyway.

In terms of offensive production, then, we have two avenues that might offer a boost over the 7 goal, 24 assist performance of last season. The first would be an increase in ice time; many of the top offensive D-men around the NHL get more than 4:30 of PP time per game, and with the departure of Marek Zidlicky via trade, it's possible that some additional time there could go to Suter. Even strength duty could also see a marginal uptick, particularly depending on how Ville Koistinen is used; if Barry Trotz feels the need to spare Koistinen EV duty and leverage him mostly on the power play, that creates additional opportunity for the 23 year-old Suter to soak up extra shifts. Even if both those options are utilized, however, we're looking at perhaps a 10% increase in overall production.

What then, about a significant increase in Suter's scoring rates? Frankly, I think there's little reason to believe that those figures will change much, as we've seen three full seasons of Suter now and have a decent idea of what he brings to the table; sound offensive instincts, an opportunistic eye for jumping up into the play, and a good shot from the point. We also have to remember that it's not like the cast around him is going to be more offensively oriented. My hunch is that with Radulov gone his EV production will tail off a bit, while the PP rate may rise slightly.

When it comes to the defensive side of the game (about time I addressed that, he IS a defenseman, after all), Suter's certainly more than capable; he's been on the positive side of the Plus/Minus stat during all three of his seasons, his penalty minute totals are reasonable, and his steady increase in ice time is a clear sign of support from Barry Trotz, who is hardly shy about holding a young player back if he's causing problems. The toughest matchups are generally reserved for Dan Hamhuis, so Suter is generally placed in a position to succeed. I expect that trend to continue, and for Suter to take another positive step forward in what is becoming a fine, productive NHL career.