Earlier today the Nashville Predators announced a new partnership with Baker Curb Racing of the NASCAR Nationwide Series, which should provide new opportunities for the Preds to reach out to both sports fans and corporate sponsors.

Follow after the jump for a look at the new Predators-themed race car, and the full text of the press release...

This picture was shared by the Preds on their Facebook page: 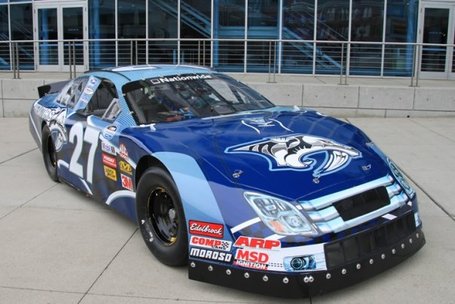 Early reviews (at least judging from the opinions of my 6- and 7-year old sons) say that the new car looks "really cool."

The following press release was sent out by the Preds, and Sporting News has a few more details:

With the announcement of a partnership between the Nashville Predators and Baker Curb Racing, the two fastest games in town have joined forces to provide local companies with regional and national exposure.

Initially, this partnership will focus on sales and marketing, but may further expand to include other initiatives in the future. With the Nashville Predators and Baker Curb working together, their partnership will create avenues for businesses to reach audiences year round on both a local and a national scale.

"Baker Curb is one of the most elite and longest tenured teams on the NASCAR Nationwide series and has a great reputation throughout the US - we couldn't be more thrilled about this joint venture." Predators President of Business Operations Ed Lang said. "With this partnership we are effectively opening a line of communication to a broader base of potential sponsors. Baker Curb, the Predators and the Sommet Center will now be able to provide exposure and create visibility for Fortune 500 companies on a local as well as a national level. Together we can bring a lot more to the table for local businesses than we can individually."

Locally owned and operated by Mike Curb - of Curb records fame - and Nashville businessman Gary Baker, Baker Curb Racing has positioned itself to be a consistent championship contender on the NASCAR Nationwide series. With an unmatched reputation of delivering results both on and off the track, Baker Curb racing has the distinction of representing some of America's most trusted brands on a national level.  In entering a joint promotional and sales agreement with the Nashville Predators, Baker Curb Racing can now help bring regional exposure to its sponsors. In turn, partnering with Baker Curb Racing gives the Predators a national outlet to help promote local sponsors.

"The Predators are a first-class organization with an extremely loyal fan base; we are very excited about this partnership," Baker Curb Racing President Matt Crews said. "Partnering with another locally owned and operated professional sports franchise whose fan base has similar demographics to those of NASCAR allows us to provide current and prospective marketing partners year-round exposure both locally and nationally.  In addition, the exposure created locally will help us immensely in our efforts to become a more visible part of the Nashville professional sports landscape."

The partnership kicked off this morning with a Press Conference held at the Sommet Center and featured Gary Baker, Mike Curb and Matt Crews from Baker Curb Racing and David Freeman, Ed Lang and Chris Parker from the Predators. The speakers discussed the present and future of the partnership, highlighting the importance of such local relationships. Photos from the event may be accessed here. The event also featured a Baker Curb Racing model car designed after the Predators recently unveiled new Third Jersey.