Share All sharing options for: Social Media Club Nashville put hockey in the spotlight at "The Puck Drops Here"

Wednesday night downtown, Social Media Club Nashville hosted "The Puck Drops Here", an opportunity for members of the Predators fan base to talk about the ways in which the community connects online, and what lessons that might hold for broader users of social media. It featured a panel discussion including myself, Paul Nicholson (of @Predfans), Codey Holland (of Section303.com) and Derek Perez, the new Chief Marketing Officer of the Nashville Predators. 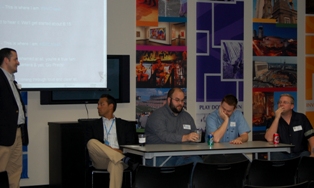 It was a great time to talk about social media (and a bit about hockey), and I look forward to the next big tech event around town, BarCamp Nashville on Saturday, October 17th.

Due to a massive logjam on I-65 some attendees were either late or couldn't make it, but fortunately enough there was  video live-stream available for remote viewers.

Buddy Oakes from Preds on the Glass provided a nice summary of the event, as did Codey Holland, and See Puck City.

For me, the main takeaways were:

Special thanks go out to Rob Robinson for moderating the panel, Jessica Murray and Georgia Cross for organizing the event, and I'd encourage anyone interested in what's going on with Social Media around town to check out Social Media Club Nashville on Facebook, keep an eye out for the #SMCNash hashtag on Twitter (where you can follow me as @Forechecker) and look into attending BarCamp Nashville next weekend.