The Nashville Predators (7-8-1) get their first crack at Central Division rival St. Louis tonight, and they'll do so with their top line intact for the first time since the opening minutes of Game One. J.P. Dumont will join Jason Arnott and Steve Sullivan on Nashville's top unit, and hopefully add life to an offense that has held the team back so far. One Predators fan down the road in Memphis certainly hopes so.

You have to love the way the Blues feature Miss Missouri in their team logos, don't you? 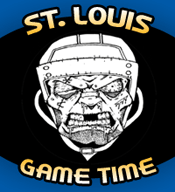 At 6-6-4, the Blues have sputtered after opening the season with back-to-back victories over Detroit in the games played in Stockholm, Sweden. Since then, they've been inconsistent and injury-riddled. They did top Vancouver 6-1 Tuesday night on home ice, the opener of a lengthy home stand,and Brad over at St. Louis Game Time wonders if some extra fisticuffs might have provided the inspiration. That win came on the heels of a 5-game losing streak.

David Perron (who raand Andy MacDonald are doing most of the damage up front, while young defenseman Erik Johnson has 10 assists already.

There is concern, however, that head coach Andy Murray's intense style may be wearing thin in the Blues' locker room. The players eventually tuned him out in Los Angeles, and the same could happen in St. Louis.

Per Jeremy Rutherford at STLtoday.com, the forward lines will be:

Getting Dumont back is huge for a Predators team that needs every goal it can get. We'll finally see the Sullivan-Arnott-Dumont line reunited, which also allows the 2nd and 3rd lines to be filled out a little more as well. With Dave Scatchard headed back to Milwaukee, it will be interesting to see how Andreas Thuresson is going to be used. Could a Thuresson-Santorelli-Hornqvist line provide some punch?

The Preds have crept back towards parity in 5-on-5 action over the last several games, and have a chance here against a Blues team that is in the middle of the NHL pack. Both sides have been getting superior goaltending, so expect a good duel in the nets tonight.

At 15.9%, the Blues power play certainly has room to improve, but is taking Paul Kariya off the unit a real solution, or an attempted motivational kick in the pants to the aging winger? Just re-read the note about Andy Murray above, and you'll see why the speculation is starting to swirl around his future this team.

The Preds are slowly building off of a slow start and sit currently in 24th on the PK, having killed off the lone penalty they faced against San Jose Tuesday night.

Might the return of Dumont tonight, and Shea Weber earlier this week, provide a spark to the Nashville power play? It couldn't hurt, that's for sure. With an 11.9% success rate, the Preds are still mired in 30th with the man advantage.

St. Louis is quite solid on the PK, 7th in the NHL at 84.5%, with Jay McClement getting most of the work up front, supported by Eric Brewer and Mike Weaver on defense. The Blues do take more penalties than the Predators do, so Nashville's best hope is to to get lots of PP time and keep plugging away until something works.

Pekka Rinne is your starter for Nashville. He's been generally solid over the last two weeks:

For St. Louis, it's likely to be the one-time Predator Chris Mason. You know he gets pumped up to play his former mates, as he went 2-0-2 last season against Nashville:

This is an important game for both teams, which are likely to be in the race for the final playoff spots in the spring; not only will each team want the 2 points that come from victory, but they'll want to deny their opponent the chance at the OTL point for just making it to overtime.

For the Preds, a victory tonight would see them finish off a road-heavy early schedule with a .500 record; not great, but manageable given all the injuries they've had to deal with. They'll need to

Oh, and don't be surprised to see a scrap or two tonight; as division rivals each team would like to establish some dominance over the other, ahead of a rematch in Nashville later this month on the 27th.