From the Nashville Predators:

Santorelli, 23 (12/14/85), has suited up for 21 of Nashville's 27 games this season, posting three points (2g-1a). The Vancouver, B.C., native scored his first NHL goal on Oct. 28 at Minnesota, and collected his first career assist two games later on Oct. 31 vs. Dallas. He is also 3-for-3 in shootouts for the Predators this season. This is Santorelli's second trip to Milwaukee, as he amassed eight points (4g-4a) in four games with the club from Oct. 16-24

It's interesting to see Cal O'Reilly as the callup instead of Colin Wilson, who by all reports has been pretty ordinary during his stint in Milwaukee the last couple weeks.

Santo's ice time has dwindled in recent days, and it is a bit of a surprise that with another line shuffle in the works, Barry Trotz isn't going to give him a chance alongside David Legwand and Martin Erat, a combo that worked well in the pre-season. The chart below shows how both his total Time On Ice, and power play Time On Ice, have tracked as the season has progressed. The last time he went to the AHL, he lit up the scoreboard. Can he regain that touch once again? 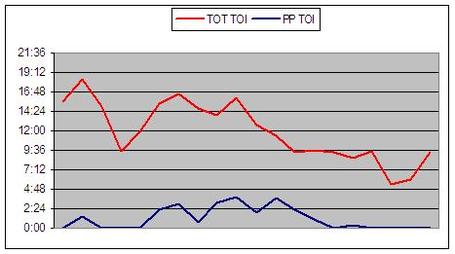