Share All sharing options for: Nashville Predators arena sponsor Sommet Group is really the one in hot water

Last week after the Nashville Predators filed a lawsuit against the Sommet Group over the non-payment of arena naming rights fees, the story took a bit of a turn sideways as Brian Whitfield, the CEO of the Sommet Group, informed a reporter at The Tennessean that Predators chairman and principal owner David Freeman had a federal tax lien currently in force, due to personal income taxes owed.

While it was certainly newsworthy to hear that Freeman is in debt to the IRS, and working to sell assets to pay it off,  how was that related to the Sommet Group not paying fees owed to the team? Other than causing personal embarrassment to Freeman (and stirring up the press in Toronto), what do federal tax liens have to do with anything here?

Apparently, quite a bit, as it turns out...

Thanks to a tip from OtF reader BamaMan-PredFan, this comes from the October 23, 2009 print edition of the Nashville Business Journal, which lists recently filed federal tax liens: 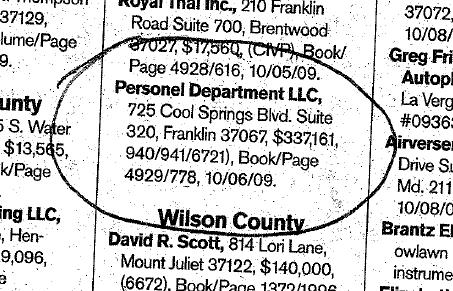 Who is "Personel[sic] Department", do you ask? Let's go back to the lawsuit that the Preds filed last week (emphasis mine):

Personnel Department is a limited liability company organized and existing under the laws of the State of Tennessee, and maintains its principal place of business at 725 Cool Spring Boulevard, Suite 320, Franklin, Tennessee 37067. Although originally formed as "The Personnel Department LLC," the company, by articles of amendment filed with the Tennessee Secretary of State November 6, 2009, changed its name to "Sommet Group, LLC."

Yup, that's right. The Sommet Group has a federal tax lien slapped on them, too. That would certainly explain why they've had trouble paying their obligations to the Nashville Predators.

What it doesn't explain is why Whitman would try to embarrass Freeman publicly by revealing his tax lien, while his own company faces a similar situation.

Evidently he was confident that The Tennessean wouldn't do any digging around of their own on this. Sure enough, they took Whitfield's accusation, verified that it was true, and ran with it, rather than do some elementary ground work to see whether the Sommet Group was simply trying to divert attention from their own financial troubles.

UPDATE: Another curiosity can be found at the Tennessee Department of Commerce and Insurance website. The Personnel Department LLC is listed as having a delinquent business license as of July 31, 2009 for employee leasing (temporary staffing), while the Sommet Group is shown as an "unapproved applicant." I spoke to someone there who said that while the firm is going through the process of getting this license renewed, they should not be conducting business until that is complete (perhaps as early as next week).

It can't possibly be good for the Sommet Group to have a federal tax lien hanging over them, and have a portion of the business interrupted while a licensing issue remains unresolved.