Based on figures obtained from the Metro Sports Authority, the Nashville Predators enjoyed a modest increase in paid attendance from October to November, despite a packed schedule that included a stretch of 8 games in just 17 days.

In total through November 30, the paid attendance average stands at 12,913. The Predators have six home dates in December, before the traditional boost that's expected once the football season passes. This graph comes from Mirtle's series on Nashville as a hockey market, showing total attendance average broken down by month during the team's history: 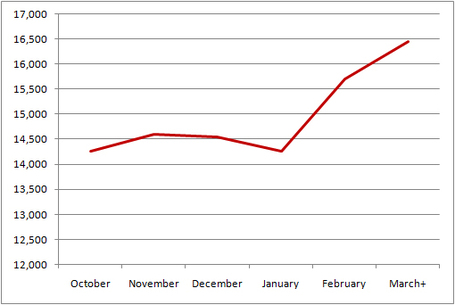 Last season the Preds rode a similar trend to achieving the 14,000 paid attendance average which is a requirement for full participation in NHL revenue sharing. Just keep this in mind as you read stories that point out a particularly disappointing night attendance-wise for a given game.

Would the Predators prefer larger crowds at this point? Absolutely - but given the overall economic circumstances, these numbers aren't bad at all.

For discounted tickets to any Nashville Predators home game, you can follow this link and use the special offer code "PREDS".