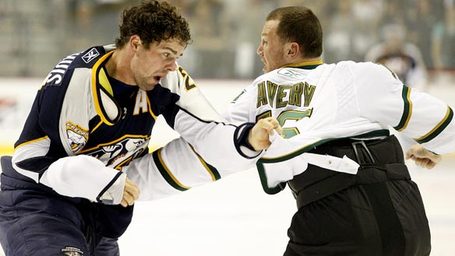 Canada's National Post is rumoring that Sean Avery could be claimed by the Predators.  We would have to pay $2 million per year

3. Nashville or Toronto: Two franchises who could use Avery for reasons besides his play. For the Predators, Avery would generate the headlines that could bring their attendance numbers up to qualify for the NHL's revenue sharing agreement...

I know we may need the attention, but still, do we want to take the bad media coverage too?

I think that Tootoo does the job by being a fan favorite. Let's let the organization focus more on getting a goal scorer than an agitator

Do you think the Predators should consider taking a risk with Sean Avery?