With last night's late win over the Kings, Nashville has leapt into 7th place in the Western Conference.

In his morning radio update on 104.5, Pete Weber noted that when J.P. Dumont got boarded late in the game last night, the reason he was slow to get up was because as he went into the boards, he basically speared himself on his own stick. He just got the wind knocked out of him, and should be fine.

This isn't strictly Preds-related, but interesting nonetheless; the Wall Street Journal's Daily Fix blog reports on an idea being tried out in the NBA's developmental league. For playoff matchups, the three division winners in each conference get to choose their first-round opponent, rather than simply going by rankings. Applying that idea to the NHL, "Last spring, the Detroit Red Wings might have chosen to skip playing the Nashville Predators, their division rivals who had dealt them three of their 21 regular-season losses and who pushed the West’s best team to six games in the first round."

Finally, someone over at the LetsGoKings.com posted a great picture from last night's game, catching Ryan Jones scoring the game-winner: 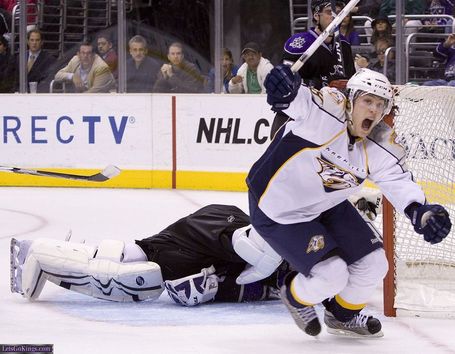