Do the Preds have enough bite?

Share All sharing options for: Do the Preds have enough bite?

While getting cozy here in my new digs at OnTheForecheck.com I haven't had much time for serious number-crunching, but today I'll dip my toe back into those waters with a discussion of Shot Quality, and how it might provide some insight into how the Nashville Predators have fared on the offensive front this season.

For those who may be unfamiliar, the idea behind Shot Quality is to assign each shot that's taken in an NHL game a value between 0 and 1, based on the frequency with which similar shots result in a goal. The factors I'm using here (in an admittedly simplified calculation) are the range of the shot (0-10 feet, 11-20, 21-30, etc. out to 61+), the type (slap, wrist, backhand, etc.), the on-ice strength of the teams (PP, EV, PK), and whether or not the shot is a rebound opportunity (taken within 3 seconds of another shot, without any other intervening events like a faceoff). For instance, this season a basic wrister from 21-30 feet at even strength has scored 9.05% of the time, while on the power play they've gone in 11.71% of the time. The Shot Quality values for those two shots, then, are 0.0905 and 0.1171.

What follows naturally from Shot Quality is the notion of Expected Goals, which is the sum of the Shot Quality from all the shots for a team within a given game. It reflects, based on completely average NHL goaltending, how many goals a team could expect to score, based on the nature and quantity of the shots they were able to take. The idea here is to separate the performance of the skaters from that of the goaltenders, and the same logic applies to defense; just sum up the Shot Quality for all the shots you're giving up, and you get an Expected Goals Against figure which can help to figure out whether the goalie is saving his team's collective bacon, or the skaters in front of him are locking things down.

With all this in mind, the question of the day is, how does the outlook appear for the Nashville Predators as they continue this white-knuckle ride towards a potential playoff berth? Is there reason to believe they can score enough goals to make the postseason? Survey the chart below... 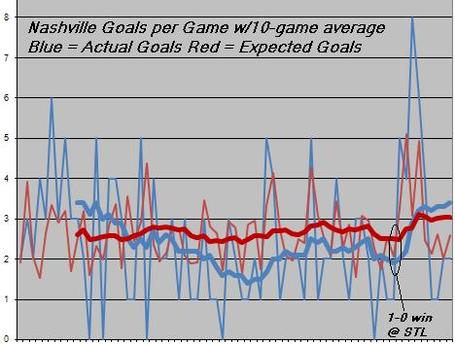 What we've got here is two sets of data; the blue is Actual Goals Scored, while the Red is Expected Goals. The thinner, zig-zaggy lines are the game-by-game results, while the thicker lines represent 10-game moving averages. This includes action up through Saturday night's 2-0 win in Phoenix.

There are a couple things which jump out at me here. First, the moving average for Expected Goals has been remarkably steady through most of the season, ranging from 2.5 to 3.0 goals per game. Secondly, the moving average for Actual Goals has swung much more wildly, from nearly 3.5 early in the year to a low of 1.5 that was reached after the New Year's Day 2-1 loss to Vancouver. Basically, from December through mid-February, the team tended to score consistently less than what you'd expect given the quantity and quality of the shots they were taking. While a short-term dip might be written off as a case of bad luck, a stretch that long is likely an indication of the general opinion of the team as lacking in goal-scoring talent, particularly after the sudden departure of Alexander Radulov.

Since the 1-0 overtime win in St. Louis on February 21, however, both trends have taken a significantly positive direction; this coincides with two factors which might well prove sustainable, and give hope that the team can maintain this pace down the stretch. The first is that Steve Sullivan, after having worked his way back into game shape, has become the dynamic offensive force that fans only dreamed of, with 8 goals and 7 assists in his last 13 games. Add to that the once-again dominant Shea Weber, who reportedly suffered lingering injuries that slowed his production from December through mid-February after a tremendous start. He has 5 goals and 5 assists in his last 10.

The key challenge now, of course, is how long the team can hold up without Jason Arnott, their leading goal-scorer. In my opinion if he can return to action within the next week, they've certainly got a shot. After that, the team has a home game against San Jose, and road games against Detroit, Columbus and Chicago, all of which will require the entire team's best effort. If the captain can get back to contributing regularly, however, the rest of the West might just have to watch out (note: I still wish they'd picked up Miro Satan at the trading deadline, though!).

For all the down & dirty info you could ever ask for on Shot Quality, head over to HockeyAnalytics.com and prepare to lose a few hours. While I'm not digging into questions of individual arena effects or some of the other factors that are discussed there, what I'm presenting here is certainly a level deeper than simply looking at Goals For results.