As the team settles in for a few days off, here's the roundup on Predators discussion this morning:

Go check out Part 3 of James Mirtle's Nashville saga, where he sums up the challenges that the Predators face over the long haul.

Brad Schrade at the Tennessean refuses to wipe the egg off his face over the botched ticket tax story that he ran with on Wednesday, and throws blame around at the lawyers involved. It all boils down to the fact that the team is paying fees as expected, and there was just a typographical error in the contract that omitted a particular clause. Here's what Karl Dean, the mayor of Nashville, said about the matter in an email to the paper:

"I spoke with the city's lawyers today, and I am satisfied with the explanation they gave for the discrepancy between the existing lease and the amount collected by the city for the seat tax for Predators games," Dean said. "It was apparently an error made while the lease document was being drafted. Fortunately, both the city and the Predators have been abiding by the economic terms that were agreed to during the negotiations."

That should be the end of the story, just fix the clause and move on; but apparently one of the new members of the Metro Sports Authority has other ideas:

Authority member Steve North, recently elected vice chairman, said it was the body's obligation to look into the matter. Any changes or amendments to the lease likely would have to go through the authority and Metro Council for approval.

"If they want to draw up a new contract, there are a whole lot of other things I'd like to change," said North, who also is a lawyer.

So... the new guy on the board wants to suddenly reopen other aspects of the lease? That hardly sounds like a good idea, and I'm guessing that it's not going to go very far. As for the Tennessean, after doing a largely decent job covering the team this season, this episode just raises all the old issues that fans have had with the paper in the past, the attitude of "gotcha journalism" that pervades the off-ice stories about the team. For a struggling business that's cutting corners in a bid to survive, that's hardly a way to endear yourself to customers. I'm guessing more than a few Preds fans are canceling their subscriptions these days (and I'm strongly considering it).

Anyways, back to on-ice developments. Kevin Allen at USA Today provides another look at the Calder Trophy race between Steve Mason of Columbus and our very own Pekka Rinne. Rinne was probably the main reason Nashville even made it to the shootout with San Jose last night, turning aside 36 of 38 shots.

The crowds over at Hockeyfights.com (hat tip to Pred fan @phragmunkee) and Kukla's Korner are abuzz over last night's fight between Jordin Tootoo and Brad Staubitz; Tootoo certainly took a beating, but I'm guessing Staubitz is going to have to answer for those elbow shots he was throwing when the teams play again next week in Nashville. And what was Terry Crisp saying about not knowing if there's anything in the rules against Staubitz using his elbows like that? There's a rule called Elbowing, and it doesn't go off the books just because two guys are fighting. If that were the case, guys would just grab sticks and whack each other over the head...

And lastly, a snapshot of the Western Conference standings at the moment. It'll be a busy weekend of scoreboard watching: 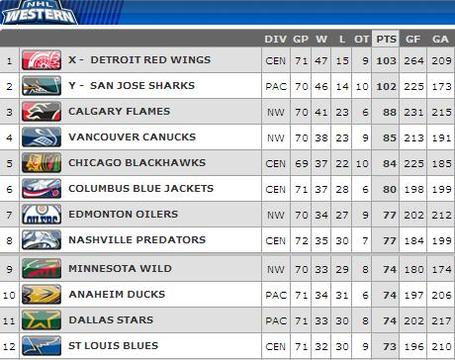