And down the stretch they come...

Share All sharing options for: And down the stretch they come...

The wide-open race to the Western Conference playoffs is as tight as ever as we enter the final three weeks of the NHL regular season. Spots 6-12 are truly up for grabs, although Columbus is quite close to locking up their first-ever postseason appearance: 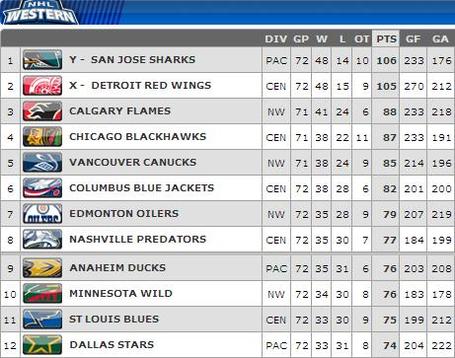 Clearly, six months of regular season action hasn't been enough to separate these teams much so far, so perhaps an indication as to how things will end up might come from examining the remaining games for each contender.

The tool I'm using today is something I put together each summer, called the NHL Super Schedule. Put simply, it's the complete NHL schedule put into the form of a publicly accessible Google Spreadsheet. But beyond just "who plays who on what day", I've calculated the distance travelled between games for each team, and the number of days that have passed since the last contest (to determine how many back-to-back situations they face). For good measure, I also throw in the main team-level statistics, such as Goals Per Game, etc., for each opponent a given team plays.

This morning, I updated those team-level stats to reflect current data, so let's see what it tells us in terms of the average level of opposition that each of these teams will face as they try to secure one of the remaining Western Conference playoff spots. For each category I've shaded the toughest values red (ok... "reddish"), and the easiest values green:

The quick-glance take is that Nashville has by far the hardest road ahead, while the Stars have the easiest. Let's take a team-by-team approach here:

Columbus: With 82 points already they've got the least work yet to do, and split their 10 remaining games evenly between home & road. They do have two full weekends coming up with Saturday & Sunday games, however, part of their NHL-high 20 back-to-back contests. (@TBL, CGY, @STL, STL, NSH, @NSH, CHI, @CHI, @STL, MIN)

Edmonton: The Oilers might have the 2nd-toughest schedule in terms of quality opponents, but they do enjoy a 6-game homestand covering Games 76-81. (DET, @PHX, @ANA, MIN, ANA, SJS, VAN, LAK, CGY, @CGY)

Nashville: Already plugging along without leading goal-scorer Jason Arnott, the Preds also have two-sets of back-to-back games remaining. They don't have quite as many matches with their rivals for playoff position as do some others here. (ANA, SJS, LAK, @DET, @CBJ, @CHI, CBJ, CHI, @DET, @MIN)

Minnesota: Only 3 of their remaining 10 games are against other teams battling for position here. Will Gaborik's team boost their chances? (@NYR, @NYI, @CGY, @EDM, VAN, CGY, @DET, DAL, NSH, @CBJ)

St. Louis: Hope still flickers for the Blues, but a five game road trip might finish it off. They do have three matchups with Columbus; will only one goaltender named Mason previal? (LAK, VAN, CBJ, @CBJ, @CHI, @DET, @DAL, @PHX, CBJ, @COL)

Dallas: Losing Brad Richards to a broken hand is unfortunate for them, but the Stars enjoy the easiest opposition down the stretch, including four games against teams that are out of the hunt. (VAN, LAK, FLA, @PHX, @LAK, CGY, STL, @MIN, @COL, @ANA)