Who needs centers? As if having Jason Arnott out wasn't enough of a challenge, David Legwand took a puck in the face yesterday in practice, so the Preds will be without their top two pivots tonight against the #1 team in the NHL. And oh yeah, they desperately need every point they can get as they fight for a playoff spot. Is that enough on the line for you, Preds fans? I have confidence that whichever Predators dress will put forth a great effort, but are the fans in the stands ready to give their best?

Questions to be answered: (1) How will the centers line up? I'm guessing Bonk will move up between Sullivan and Erat, with O'Reilly getting third-line work. (2) Can the defense pair of Ryan Suter and Shea Weber step up offensively to help alleviate the shortages up front? (3) Will Brad Staubitz face any retaliation for the elbow-bashing he gave Jordin Tootoo last week?

Sharks coming in: Last night they dropped a 6-5 shootout decision in Chicago, so perhaps there might be some tired legs on the San Jose side. Sharks captain Patrick Marleau missed that game as his wife gave birth to their second son Wednesday morning, but is expected in the lineup tonight. San Jose is dinged up a bit, however, as Rob Blake, Ryan Clowe, Marcel Goc, Mike Grier, Kent Huskins, Tomas Plihal, and Claude Lemieux are all out of action right now, per the Sharks preview.

Preds coming in: Three straight OTL points have Nashville still in the thick of the playoff chase, but victories are becoming more important by the day. While it's frustrating to watch rivals like the Ducks play doormats like Colorado, the Preds just have to win the games they're given.

Sharks to watch: Joe Thornton is driving one of the top offenses in the league, and has 11 points in his last five games (4G, 7A).

Preds to watch: Look for Weber & Suter to jump up into the attack as needed to try and snag a lead that the team can lock down. Defensively, whichever center gets matched against Thornton (Bonk?) will probably have the most important job on the ice.

Here's a look at the two teams in the main statistical categories, along with overall NHL rank:

As one of the users at the Preds message boards pointed out recently (can't find the link at the moment), perhaps Gimli says it best in The Return of the King: "Certainty of death. Small chance of success. What are we waiting for?" 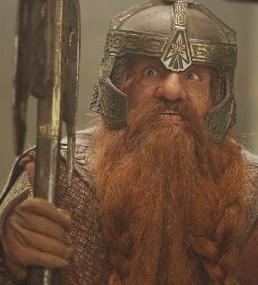 I bet he'd be wicked in front of the opposing net.

Who draws the penalties, and who heads to the box? Data up through March 22nd:

And lastly, a look at the goalies for tonight's game. Expect Rinne in net for Nashville, and perhaps Boucher for San Jose as Nabokov played last night in Chicago.