The hockey world lends a hand to fallen teen

Share All sharing options for: The hockey world lends a hand to fallen teen

I figured that hockey news would be few and far between during my weekend trip to Indiana, a stolen moment or two on the internet to check boxscores and blogs. So imagine my surprise to sit down with the Saturday Indianapolis Star, to find Jarome Iginla on the front page of the sports section.

A local teen hockey player, Derek Zike, broke a vertebra in his neck in January, and has been paralyzed from the waist down. Since then, there have been a few positive developments, but the road back is long and terribly uncertain. But at least the hockey world is trying to lend a hand:

When news of Zike's mishap spread, it quickly galvanized the tight-knit hockey communities in Chicago, Detroit and Indianapolis. Fund-raisers have been non-stop. 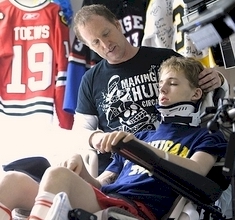 But it wasn't just the youth hockey community that has reached out to help with Derek's medical expenses...

Famous figures from the hockey community have taken an interest too. Jack O'Callahan, a member of the 1980 USA Olympic gold medal team, phoned Zike on the 29th anniversary of the upset of Russia. Chicago Hall of Famer Denis Savard called, too. Mike Babcock, coach of the reigning Stanley Cup champion Detroit Red Wings, stopped by.

If you'd like to donate to Derek's cause or just leave a "Get Well" wish, head over to www.derekzike.com.