Thanks in part to some impressive victories last week (5-3 over Chicago, 4-1 over Phoenix, and the 8-0 parade over Detroit), Nashville Predators GM David Poile has gone on record saying that "we're trying to be a buyer," at the NHL Trade Deadline, and is looking to add some offensive punch in a bid not just to make the playoffs, but to make some noise once they get there. So what sort of players should Mr. Poile seek to acquire? 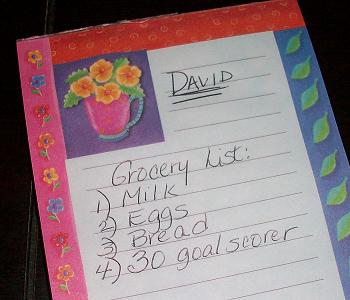 First of all, let's draw a simple parameter around any potential pickup; nobody making more than $6 million/year beyond this season is affordable, and even that figure assumes some healthy salary going the other way in trade.

Given that there are relatively few teams looking to sell such players at the deadline this year, let's go through them team-by-team:

Atlanta: The Falconer over at Bird Watchers Anonymous gives us a breakdown of the Thrasher forwards who might be available, but frankly, none of them look like viable options for Nashville. The one guy who jumps out at me as a gifted winger who could help the power play would be Slava Kozlov, but his salary and no-trade clause present barriers there. Well, there's also that Rich Peverley character...

Colorado: Mile High Hockey has the Avalanche forwards lined up for display, and Milan Hejduk is another experienced hand on the wing who could provide exactly what the Predators need, except for the fact that he, too, has a no-trade clause. Drat!

There is one other option in Colorado, however, in Marek Svatos. Quoting Mile High Hockey...

I've said this before: I don't think Svatos has much usefulness if he's not able to crack the top two lines. He's been unable to do that so far, and doesn't appear likely to do so in the future.

Svatos is an above-average performer in Colorado both at even strength and on the power play, and is under contract through next season at $2.35 million. Let's mark him as "interesting."

Los Angeles: Kyle Calder has been mentioned as an available rental player since he'll be an unrestricted free agent this summer, but his cost had better not be too high. We'll tag him, however.

New York Islanders: The obvious case here would be Bill Guerin, who appears to be twisting in the wind while the clock ticks. but you can bet the bidding over Guerin will get too high for David Poile's liking; a team pushing hard for a Stanley Cup is likely to be willing to mortgage the future for a shot right now, and Guerin is probably the most coveted sniper available. We'll put him back on the shelf as "too pricy", and head back to the clearance section, so nothing else on the Isles roster excites us...

Ottawa Senators: While Jason Spezza would make a huge addition to this team, his salary and the likely asking price from Ottawa makes that idea a non-starter (enticing though it might be, see Section 303's piece noted below). Further down the roster, however, Antoine Vermette might draw some interest. He has one more year left on a deal that will pay him $3 million next season, and could provide depth down the middle. He's another one we'll mark for review...

Phoenix: Olli Jokinen would certainly give Nashville a dominating lineup at center, but is there a player in the NHL (other than Sean Avery) with a more obvious "damaged goods" label on him? A standout performer on a number of bad Florida teams, it was hoped that he'd provide the talent and leadership to push Phoenix into the playoffs, but it speaks volumes about this guy that he's on the block again less than a season after the blockbuster deal that brought him to the desert. I'd steer clear. Nothing else on the Coyotes roster jumps out as a solution to the Predators' needs.

Tampa Bay: If there were a way to get Martin St. Louis without giving up one of the core players under long-term contracts, that would have me doing the Happy Dance all around my living room. Back in reality, however, there is Mark Recchi, a prototypical rental opportunity (experienced, skilled, accepting of a lesser role) who might provide some affordable help.

Toronto: Brian Burke's garage sale is in full swing, but the Truculent One appears to expect top dollar for his wares. Dominic Moore gets high marks for his efforts in a lousy situation, and since he's going to be a free agent this summer, he might warrant a deeper look.

So now that we've tagged a few possibilities, let's take a deeper dive into the numbers for these guys. The logic I'm using here is based on an MVP formula I was toying with earlier this season; it assesses the total positive and negative impact a given player has had on his team, across 5-on-5, 5-on-4, and 4-on-5 action, in addition to the effect of his Penalty Plus/Minus. It's important to stress that these figures represent a player's impact relative to that of his teammates, and not based on an arbitrary NHL standard. For all the details, you should check out this piece I did a few months back.

So here's the basics: I'm only using 5-on-5 and 5-on-4 performance, since the Preds don't need PK help. For each of those situations we have the average time that player gets per game (TOI), their effect on Goals For & Against per 60 minutes of play in that situation (Rating), and the total cumulative result, which takes into consideration Games Played, Time On Ice, and Rating. Then we have Penalty Plus/MInus (PPM), the Impact on Goals For & Against resulting from the power plays generated (or PK's caused), and when you add those all together, a Total Impact on Goals For & Against from these scenarios. Again, this is a measure which describes each player relative to the performance of their teammates.

Starting at the top we have Marek Svatos, who appears to be a positive performer across the board; this has to be muted somewhat by the fact that Colorado is 29th in 5-on-5 GF/GA, and has the 22nd ranked power play. All the same, he doesn't appear to be the reason behind the Avalanche's failings this year, and might make a good addition to the Nashville lineup.

Kyle Calder represents another intriguing case; in 5-on-5, Los Angeles is just a hair better than Colorado, yet Calder stands out positively in that situation more than twice as much as Svatos. His power play production is mediocre (which, frankly, would be a step up for Nashville), and his upside is limited given his age and experience. He'd perhaps make a decent role player, but doesn't stand out as a major aid.

Antoine Vermette is a major downer in 5-on-5 on a bad Ottawa team, and with his poor Penalty Plus/Minus thrown in, he just doesn't appear to match well with the Predators requirements.

Mark Recchi may come relatively cheaply in trade, but his role would have to be managed very carefully. He might be able to help the power play, but in 5-on-5 would likely be a serious liability.

Dominic Moore could potentially be a modest addition in terms of both even strength and power play action, but will Brian Burke command too high a price? He's having a career year in offensive production, but that's likely to due to playing a more pivotal role than he would in Nashville.

Bottom line, Marek Svatos seems to be the most attractive option of the bunch, but it remains to be seen what the price might be to land a young winger like that who has one more year left on his contract.

Be sure to check out other pre-deadline opinion from Section 303 and What the Puck!