Share All sharing options for: Predators a lock to achieve key attendance goal

While the Nashville Predators won't say so until the season is complete, I'm here to tell you that they're a lock to achieve the 14,000 average paid attendance mark that helps ensure full participation in NHL revenue sharing.  The question of whether or not the team could hit this goal has been an ongoing story over the last couple seasons, given all the questions raised about franchise stability after Craig Leipold sold the team, and new minority owner Boots Del Biaggio was exposed as a fraud.

In yesterday's Tennessean, the print edition (no link available) provided an update stating that as of the March 24 home game against Anaheim, the average paid attendance figure stood at 13,978. 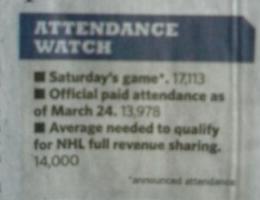 Sorry for the lousy picture quality!

Since then, they've played home games against San Jose and Los Angeles. The announced attendance figures for those games were 16,562 and 17,113, respectively. Using a conservative estimate that 1,000 tickets were given away by the team for each game (comps appear to have been running around 800 per game so far), that means that the team has already topped the 14K mark, with two home games remaining: Saturday vs. Columbus, and next Tuesday's home finale against Chicago, both of which are likely to sell out (or come very close). By the time all the numbers come in, it looks likely that the Preds will finish with around 14,150 average paid attendance.

Last year, the team sold an average of 13,429 tickets per game, so this represents roughly a 5% increase. No, hockey's future isn't secured yet in Nashville, but the new ownership group and the entire Predators organization need to be recognized for the progress that's been made.