Here's what's being discussed about your Nashville Predators this Monday morning:

First off, Margie Newman gives us this report from the Predators Foundation "Club 501 Disco" that was held last night to benefit the charitable arm of the team. Check out Joel Ward and Greg de Vries in their 70's finest... 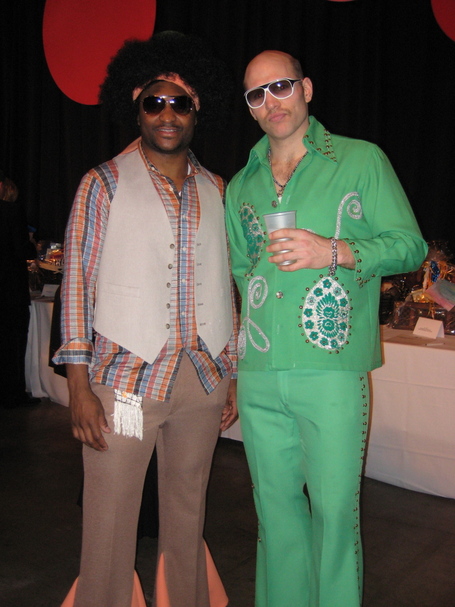 Is it just me or is de Vries channeling the spirit of Reggie Dunlop there?

Buddy Oakes of Preds on the Glass has an article featured over at FoxSports.com about the tightening race for the Calder Trophy; once presumed to be wrapped up by Columbus goalie Steve Mason, Pekka Rinne is making his case for the rookie award with his phenomenal play over the last several weeks.

John Glennon at the Tennessean lays out what is called a "key week in fight for playoffs." Actually, with Eastern Conference opponents like the Capitals and Rangers scheduled for this week, along with the Coyotes who have dropped out of the Western Conference race, I'd say this is the least critical week left on the schedule. Most of the games the rest of the way are against playoff rivals, so those games matter more in the standings.

The Metro West Daily News of Framingham, Massachusetts provides a glimpse into what it's like for team doctor Paul Rummo, who keeps an on the team from his seat eight rows behind the bench.