Share All sharing options for: Predators fans "Tweetup" in Nashville

It was a great evening last night at The Closing Bell Wall St. Pub in Nashville, as Twittering hockey fans gathered for a local chapter of the "NHL Tweetup" that took place in more than 20 cities across North America. 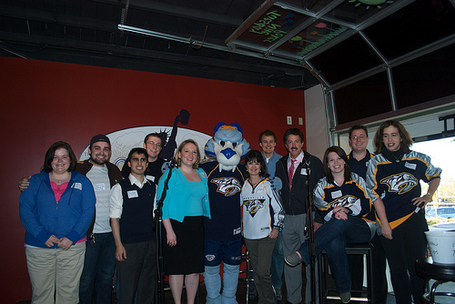 Fortunately for Gnash, he came and left before I arrived with my kids. My 6 year-old would have totally drunk him under the table... (Photo courtesy of @loudestnoise)

Major credit goes to Amy Dawson (@AmyPredsFan), George Scoville (@stackiii) and Molly Pearson (@MollyPearson) for all the effort in finding a location, getting the word out, and coralling all the goodies.

It was exciting to see about 100 of Nashville's hockey fans come out to celebrate the opening night of the Stanley Cup playoffs. There were some great giveaways contributed by the Predators and the NHL, and Buddy and Jackson from Preds on the Glass improvised a live podcast during the event, a daring endeavor given the noise inside and outside the pub!

Feel free to browse pictures from all the NHL Tweetups around North America, as well as some pictures of the local gathering in Nashville.

It was a wonderful chance to meet fellow fans, some of which I've only communicated with either via Twitter, email or blogging. Among the attendees were Preds radio play-by-play man Tom Callahan, Mark Willoughby from The View from 111, Jeremy Gover & Codey Holland from Section303.com, and Brandon Felder from HockeyBuzz. Paul Nicholson (of @PredFans fame) was there with his wife and newborn son, who even has his own Twitter account, which makes my wee folk jealous. @Karpo, a prominent local blogger and recently converted Preds fan, also brought her clutch of young'uns as well, so we had the next generation of hockey addicts well represented (here's her recap of the evening). The next time we do this, we should remember to have a sign-in sheet so we can post a complete list! 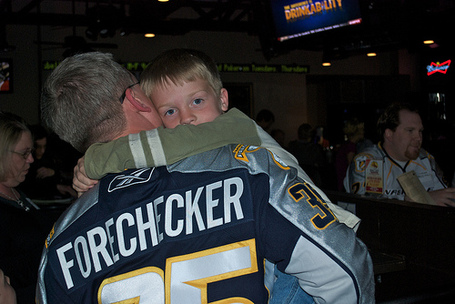 It was a long evening for the Little Forechecker

All in all it was a tremendous event, and people are already talking about doing something similar over the summer, perhaps for the NHL Draft, and most certainly once training camp opens. Even my Twittering bride (@showingmyassets) signed on with @PredFans afterwards; the Predators' season may be over, but the hockey fans in Nashville are still going strong!