Share All sharing options for: A good night for scoreboard watching, Preds fans

The Chicago Blackhawks did the Preds a favor last night, beating St. Louis 3-1 and keeping the Blues in 9th place, but tonight we've got three games on tap which will influence the Western Conference playoff race:

St. Louis @ Detroit: It's a case of "out of the frying pan, into the fire" for the Blues as they face a brutal back-to-back of Blackhawks and Red Wings. Nashville fans want to see Detroit win this one in regulation to keep the Blues from tying or passing the Preds for 8th.

San Jose @ Edmonton: The eulogies are already being written throughout Alberta after Oilers coach Craig MacTavish's blown illegal stick call against the Ducks sent his team to yet another home loss. With 81 points, they're 3 behind Nashville with 5 games to play, so they're not quite mathematically eliminated, but that day is coming soon.

Anaheim @ Vancouver: The Canucks have caught fire lately, taking the Northwest Division lead by going 20-5-1 after an eight-game losing streak in January. The Ducks are ahead of the Preds by a mere tiebreaker, so here's to hoping Vancouver keeps things rolling on home ice.

It's a lot to ask for all three games tonight to fall our way, but the odds in each contest are heavily in Nashville's favor, as the top 3 teams in the West go to work on the Preds' behalf. 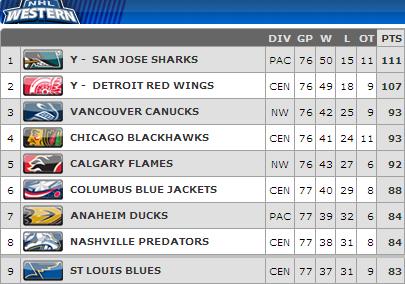