Taking one for the team

Share All sharing options for: Taking one for the team

These are the days of the Stanley Cup playoffs, the most grueling post-season in all of professional sports, a two-month campaign of brutally intense action that forges bonds of comradery forever, as selfless teammates make sacrifices for one another.

Holding on to that puck for an extra split second, knowing that an opponent is about to cream you, can make the difference between a simple pass and a game-breaking opportunity, and in the playoffs, hockey players make the "team-first" decision without a second thought.

Sometimes, however, even fans need to take a hit in the interest of the greater good, and that's exactly what I did tonight.

While the Bruins were eliminating the Habs, and the Rangers put the Capitals in a deep, deep hole, I went with my wife to a Yanni "Voices" concert. It was tough, but I figure after this I've got TV rights at least through the end of the Stanley Cup Finals. 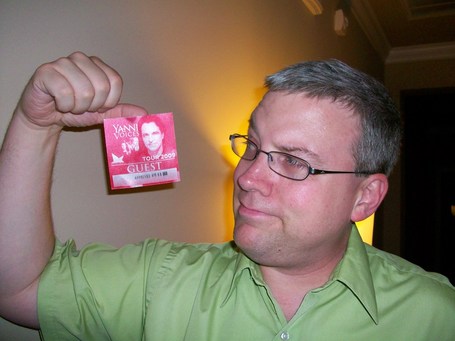 Oh yeah, this is worth serious brownie points.

Yup, there I was in the midst of a rabid crowd of Yanni fans and I have to say it was an... interesting experience. In all honesty, while I'd heard of the guy I'd never heard any of his music before, and while the performers were all very talented and energetic, I just couldn't get past the feeling that most of the songs sounded very similar. It was like being trapped in an elevator, stuck between the John Tesh and Trans-Siberian Orchestra floors. When the chance presented itself, I let out a few tweets of desperation to fellow hockey fans out there.

Well, at least at one point there were two hot chicks writhing on a piano, so it wasn't a total loss.

Then there was the guy I call "Little Fabio"; he had the flowing locks and the too-tight leather pants, but let's just say he's the Scott Nichol of the Latin heart-throb singing industry, not the Zdeno Chara.

He was a nice guy, though, very pleasant and amiable.

How do I know, you may ask?

Well, not only did I sit through the show, but my wife had passes to a "Meet & Greet" afterwards... so once the crowd cleared out we were hustled backstage for a quick exchange of pleasantries and a picture of my wife with the "Voices". We didn't hang around to wait for Yanni himself, as we did have to pick up our kids from our neighbor's on the way home.

That... and I did manage to catch the final minutes of Calgary/Chicago once we made it back. Like I said, the evening wasn't a total loss.