Alexander Radulov speaks his mind, but has little to offer

Share All sharing options for: Alexander Radulov speaks his mind, but has little to offer

Courtesy of Dmitri Chesnokov at the Washington Capitals Examiner, we have a translation of an interview that Alexander Radulov recently gave to Pavel Lysenkov of Sovetsky Sport regarding his status with the Nashville Predators. Earlier today Mirtle also pointed to Russian media reports that A-Rad plans on sticking with the KHL for the time being. 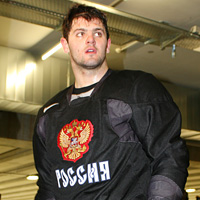 What's remarkable about this interview is that Radulov sounds pretty much exactly the way Preds GM David Poile characterized him, based on informal conversations the two had during the world championships:

Asked if Radulov expressed regret for leaving the Predators in a difficult situation last July, Poile paused before answering.“I think he has a hard time understanding our position when somebody else was offering him an improved situation,’’ Poile said. “Just like I believe that if he wants to come back — regardless of the fact he signed a multiyear contract there — I don’t believe he thinks it’s a problem coming back.’’

And here's what Radulov has to say in today's the*** interview:

Is it true that you have the right to go back to the Predators next season?

"Theoretically it is possible. But right now I am a Salavat Yulaef player. I am tired to all the rumors and talks. I want to stay away from this situation. I have an agent. Let the decision be made between the two clubs. And the player is not to be blamed for anything. Maybe I am guilty of something. But you cannot turn back what's done. Life goes on."

Does Radulov really see himself as adrift in a situation that simply needs to be hashed out between the two teams and his agent? That's an awfully helpless position for a guy to take over his professional career. His agent, after all, is his employee, and ultimately, the decision to abandon his NHL team and jump to the KHL rests on his shoulders.

Whether he likes it or not.

*** As John Glennon clarifies (and I should have noted in Chesnokov's article), the interview occured about a month ago at the World Championships.