Share All sharing options for: You can't out-puke a HockeyBuzzard...

The latest round of "traditional vs. new media" is being fought this week on the baseball front, as a blogger named Jerod Morris of Midwest Sports Fans has been roasted for posting a piece speculating on whether the hot start of the Philadelphia Phillies' Raul Ibanez might be related to performance-enhancing drugs. While Jerod never gets to the point of accusation, the mere hint of speculation brought an empassioned response from Ibanez himself, including the always witty "42-year old blogger typing in his mother’s basement" rejoinder. Earlier today, the blogger was invited on ESPN's Outside the Lines show to discuss "the responsibility of those writing and speculating in various forums." Once again, the traditional media takes a swipe at bloggers as reckless, anonymous snipers, whose widespread audience is somehow undeserved.

I have to say that I think the reaction here is entirely overblown, given the number of qualifiers and alternative causes that are given for Ibanez's performance in the original piece. Regardless of the merits of Morris' article, however, it does raise the issue of accountability on blogs, and on that front, I think we, as participants in this developing medium, need to hold each other to account on that front. In the world of hockey blogging, bashing Eklund for his rumor-mongering is a favorite pasttime in many parts, and as noted this morning, HockeyBuzz Hogwash has wrapped up their 18-month tracking of the Hockeybuzz scribe with the conclusion of, "Is Eklund a Fraud? ABSOLUTELY 100%".

So it was interesting to see this afternoon how another party, not a member of either the traditional or new media, stepped up to slam the hockey world's poster child for recklessly anonymous baloney passed off as insider information...

Allan's a regular presence on Twitter, and a couple updates today served to highlight the visibility that Eklund's baloney gets, and how it draws the attention of people in the business: 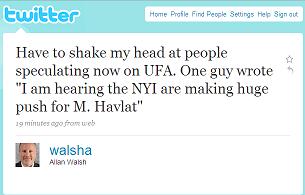 Of course, "one guy" is the infamous Eklund. This from his blog on Monday:

Martin Havlat: He has said on Twitter that he wants to stay in Chicago, but I am hearing the NY Islanders are making a huge push. The Sabres and Caps are as well going to get involved. The Canadiens could aslo [sic] see Havlat as a Vinny Lecavalier consolation prize. 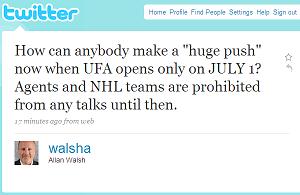 Of course, Allan's comment applies to everyone in Ek's ridiculous post. Were any of the players he notes actually speculated about by NHL teams, it would amount to tampering - but why question oneself out of a titilating story? The answer is that just as the Weekly World News finds a place on newstands next to legitimate newspapers, the Hockeybuzz shtick is to generate clicks through sensational headlines.

What I love is this snippet from the Hockeybuzz FAQ page:

Eklund works tirelessly in an attempt to find the most up-to-the-second information from within the hockey world. He believes in reporting any significant discussions that he hears in regards to player movement no matter how minor or how realistic it is in his own opinion. If the information is coming from a strong source with a solid history of good information Eklund will post it...

"A solid history of good information?" Based on his 3.1% accuracy rate, I'm surprised he has any sources to draw upon at all.

As bloggers try to push the boundaries by establishing contacts and working relationships with members of NHL organizations or player agents, stuff like this provides an additional obstacle in their way. For too many "establishment" entities, they can point to groundless work like this as a reason to steer clear of the entire sector.

Does it get tiring calling out Eklund's steady stream of tripe? Sure, but it's still an exercise worth doing. It enforces the social norms of the sports blogs that take their work seriously, and thus hope that readers will take it seriously as well.