The first big trade leading up the 2009 NHL Entry Draft almost went down this afternoon, if you believed a couple reports that came out earlier today, and were then propogated via Twitter throughout the hockey world. We start with HockeyBuzz's (shocking, I know) Andy Strickland: 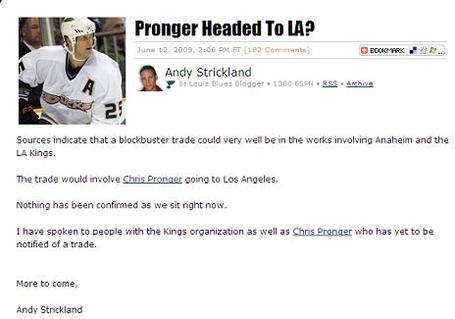 This snapshot comes from a revised article - the original had a specific deal laid out that had Pronger going to L.A. for young blueliner Jack Johnson and the 5th overall pick in the upcoming draft. At least Strickland notes that "nothing has been confirmed" - he's somewhat honest about the tripe being offered for public consumption. But the "Pronger trade" train was just getting rolling...

"The Score" took a much more authoritative tone, and ran with "Steve Ludzik has learned that the Anaheim Ducks have traded defenseman Chris Pronger to the Los Angeles Kings for D Jack Johnson and the 5th overall pick in the upcoming draft."

The Score immediately sent out an update via Twitter, which set hockey fans scampering over a blockbuster deal: 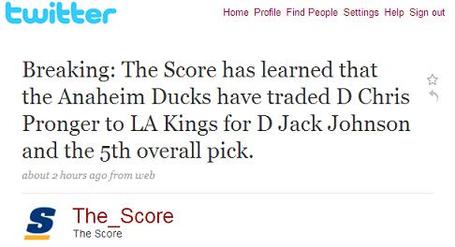 While many started debating the value of the deal and the impact on this month's draft, others kept scanning NHL.com, TSN.ca, and other sites for confirmation of this whopper.

But nothing came. Then, L.A. Kings beat writer Rich Hammond chimed in: "Dean Lombardi sent me a text message that simply said, "Rumors not true.""

From the Anaheim side, Eric Duhatschek had the following:

But for now, the official word from Ducks’ GM Bob Murray, in a short but pointed e-mail note, is that it did not happen. In fact, Murray texted back a NO (caps his), when asked if there was any truth to the report.

Certainly, there can be no official deal anyway between teams until the Stanley Cup is won tonight. The roster freeze that goes into effect at the NHL trade deadline remains in place until the season is over – for purposes of fairness, more than anything else. If Detroit and Pittsburgh can’t do deals, no one else can either. Teams can talk; they can frame the parameters of deals; but they can’t do anything official until the commish hands the Cup to either Nicklas Lidstrom or Sidney Crosby.

I wasn't able to confirm this "roster freeze" by looking into either the NHL's CBA or bylaws. While eligibility for playoff duty is contingent on a trade occuring prior to the deadline (March 4 this year), I couldn't find an outright ban on teams making deals these days. Duhatschek may well be right here, I just couldn't find the specifics.

It was just a couple days ago when I wrote that online hockey writers need to be more careful about what they run with, and especially in the age of Twitter, news travels fast - so fast that you can't put the cat back in the bag, or the toothpaste back in the tube, or whatever overly-strained metaphor you want to use. Just as you may get a lot of clicks by being first with a sensational headline, irreperable damage to your own reputation can be done in record time as well.

I've never read "The Score" before today, and now I'm certainly not inclined to do so in the future. HockeyBuzz is already known for this sort of thing, so there you go. The Moral of the Story? Wait for a legitimate news source to verify a big trade before running with it - half the problem is that once a few outlets repeat what Strickland and The Score said, then others can claim "numerous online reports indicate that..." even though there really isn't validation from multiple places.

Well after this rumor has been shot down, people are still picking up on the original reports and passing the "news" around, which is a sad distraction from the NHL's real showcase tonight, Game Seven between Detroit and Pittsburgh.

By the way, in case you think this speculated package was a lot to offer in exchange for a 34 year-old defenseman entering his 16th NHL season, consider the trade which brought Pronger to Anaheim just three years ago (from Hockey-Reference.com):

Lupul had just come off a 28-goal season, to boot. That's two NHL regulars, two 1st-round picks and a 2nd in the summer of 2006. Three years later, we're looking at a good young player and a high 1st-rounder. Contract status and salary cap implications can have a lot to do with these kinds of trades, that's for sure. As for if this deal might happen over the coming weeks, nobody can really say right now. All we do know is that it didn't happen today, despite the excited reporting to the contrary.